The best thing about sieging Altdorf was... 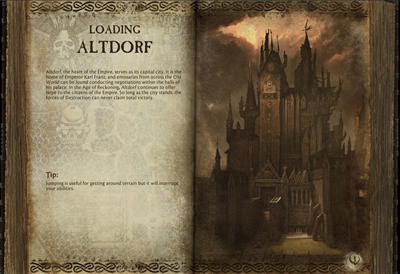 The worst bit? Everything else.

Just like when Order attacks IC, our first Altdorf siege was also a laggy pile of crap. I've got a good system, my mates have good systems, but these city siege instances run terribly.

Why are city siege instances so bloody laggy?

Why did the zone crash twice?

Why was there numerous zone crashes before people even got to Altdorf?

Again today I had people comparing it with Alterac Valley in WoW, which doesn't lag anything like WAR with roughly the same amount of people. Bad comparison? Not really. I'm sure from the dev's perspective there are a million and one reasons why we shouldn't compare the two, but purely from a gamer's perspective its an 80 person PvP instance and it doesnt run like a lame goat.

The worst bit is that I can't even tell if the public quest set up is ok or not, because the game runs so badly in these situations it's not being given a fair trial.

Amazing really, in 24 hours I've had some refreshingly brilliant moments in T4 and then been rudely slammed back down by what should have been a large slice of awesome pie, with custard. It's such a shame that reaching the end game tarnished all the great work put in by Destruction to get there.

There was some entertainment to be had out of it, but not any thanks to the game itself. After the 2nd crash we ended up in an instance against what appeared to be a full 48 Order from one of their powerfull alliances (some of the same faces from last night). We were down to 3 groups in our warband after the crashing, but thankfully there was another warband of destruction in there too. The first battle for the PQ was a real tough one, with us failing to kill the Lord. Clearly this wasn't going to be a loot farming instance, so what did the other destruction warband do? They quit and left us with just our 3 groups against the Order. Hah bit lame tbh, but it sure left us with a challenge... :P 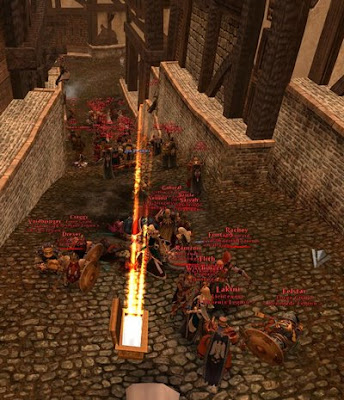 We obviously got battered, but we put in a pretty good show for ourselves IMHO and at the least managed to stop the Order warbands farming the PQ. Think we gave them a few scares when we charged their healers in the back a few times :D
It seems that getting to Altdorf was exactly what we needed and at the same time, the worst thing that could have happened.

I saw people that until now had stayed positive about WAR become very disillusioned. This was the carrot they'd be working towards, the light at the end of the tunnel, but it turns out the carrots actually a bit of a turnip.
Posted by Bootae at 16:07