Your instance is full

Today we saw the fruits of lots of planning, coordination and hard work, as destruction took 2 forts down within seconds of each other and the Altdorf siege began. Except for 1 big problem. 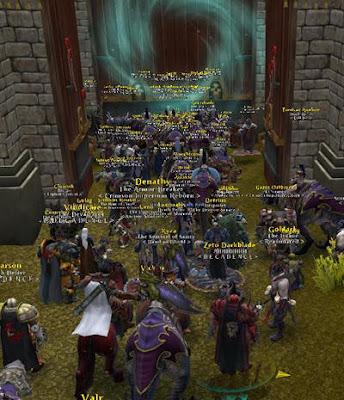 So despite having got to Altdorf, we can't actually go there. After 1.2.1 getting to IC or Altdorf on Karak Norn is hard work, we've got a very competitive server these days. Yet all that time and effort for nothing. And I've just heard that Order players are complaining of the same thing, so they can't get in either. WTF? Both sides have warbands of players that want to fight in the city siege, but the game won't let us.
To quote an alliance member:
A "your instance is full" pop up message is not a valid end game
Mythic this is not good enough. I have had to post too many negative things lately, I don't like it. Sort it out.

Update! We got in by having everyone leave the warband, queue solo and then reform it inside. Ok its cool we got in, but that's just bloody stupid. Our instance was full, yet it let us in solo with EXACTLY the same number of players to EXACTLY the same instance. LOL :P

Update 4!
Finally got back in. Wish I hadn't tbh. We got Lord on last stage of the PQ to 11% and the zone just crashed...
Forgot to mention the CTDs earlier. Sigh... What a waste of my time this was.
Posted by Bootae at 22:50