Had a couple of emails asking if I was still going to update on my Choppa progress. Ten thousand apologies! I forgot basically :P 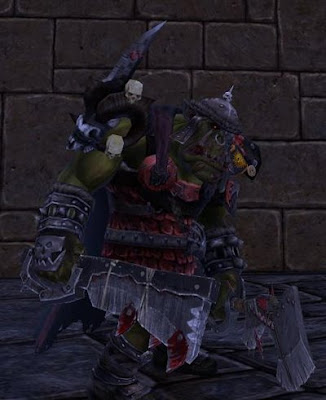 I've carried on with the PvE quest and PQ grinding to get up to level 35. I'm now thinking that I'll focus on RvR to get my realm rank up, it's a mere 24 at the moment. I had been told that we got pick lock at level 35, this would appear to be bollocks and I'm now hearing it's at renown rank 30. Doh. That was why had I raced up to bloody level 35... Bugger.

Aaaaaaaanyways, how is the Choppa? Pretty cool to be honest. I'm still going with Path of Da'Wrecka, which is fun though a little 1 button spammy with lotsa choppin. But it's fairly relaxing to play in a sort of psychotic way. It's very easy to farm mobs in PvE. When I've got rest XP I quite often just farm PQ mobs, since I kill up to around 5-8 even level mobs at once, depending on their type of course. With rest XP that's netting roughly 1.5k per mob, which adds up fast. 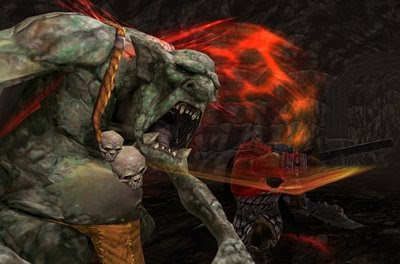 As for RvR, I've done a wee bit in tier 4. So far I've been battered in 1v1 fights (fighting geared 40s doesn't help ofc), but found myself to be quite usefull in group situations. With my AoE slow down, lotsa chopping, charge skill and Git to DaChoppa I've been able to cause some carnage and catch runners. I'm not sure how well Choppas are balanced yet, they seem ok to me in RvR, but it's probably too early to tell, but I suspect the yells of OPness are perhaps just the usual whinging.

Main thing for me remains, it's an Orc, it looks cool and it's fun to play, in a straight-forward Orcy way.
Posted by Bootae at 09:54