No! Not like that you dirty perv :P Or maybe that's just me... Anyways I digress.
A little while back I was posting about a time when it felt like the entire Order faction arrived in Caledor’s western keep. One of those “OMFG 10+ warbands!” moments... As previously discussed this crashed the zone big time. Now, I’ve no idea if it really was the mythical 10+ warbands, but it was by far the most Order I’ve ever seen in one keep. As such I don’t think anybody should be surprised the zone crashed. To be honest, I can’t see this type of MMO ever being able to handle that many players in one small area. So assuming there’s an element of truth in that statement, the question is what could be done to stop so many people congregating in one keep? 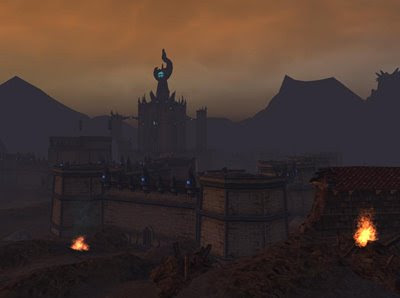 There’s always the option Mythic have gone for with the Fortresses. This is where the zone has a limit to the amount of players that can be inside, but in my mind at least this is as much a pain in the arse as it is a benefit. When all the action is in one area, but you’re not allowed in, that’s just no fun. There’s also the new idea to teleport people out if the zone is going to crash, which is fine in that it stops the zone crashing, but rubbish for anyone actually playing the game.
In fact this new Winds of Change is worth a few words. Firstly:

I can not stress enough how terrible this is as a main solution to the end game lag and crashing. If I've worked towards a keep or fortress take, only to be teleported out and basically told "Bugger off you can't take part", I will be absolutely bloody livid. I've encountered this in games before and always loathed it. They had similar things in Asheron's Call and even Ultima Online (if you remember the warping when the 2nd age went live and everyone rushed to place new housing) This may mean Mythic can do the whole positive spin bit and say how they've reduced zone crashes, but it will also piss a lot of people off and generate more bad press if this is alone is the solution to zone crashing and lag.
What Mythic need to do is give us much better reasons to fight over multiple zones. If I log on and see Fell Landing is under siege, that shouldn’t effectively cancel out all oRvR because everyone is rammed into one zone and everywhere else is dead or lagged to crap as a side effect. There should be multiple oRvR things we can choose to do at any time. It should be a war on multiple fronts, with multiple goals and not so focused around Inevitable City/Altdorf or when it arrives the Land of the Dead. If we can’t fit everyone into one zone now, are Mythic really confident that Land of the Dead will stand a chance? Keep in mind this zone starts at level 25, so there could potentially be even more players there… I do not want to be all doom and gloom about Land of the Dead, but it does make you wonder.

Obviously we don’t know the details of how LotD will work; perhaps there are things in place that will prevent it being a sandy lag pit from hell or perhaps by it’s very nature it will spread players across the other zones too. However I would suggest that Mythic need to go further and also implement some of their original plans for WAR and put in the 4 missing capital cities. This is something they said could well happen, way back in the early days after launch it was mentioned and again, if I recall correctly anyway... 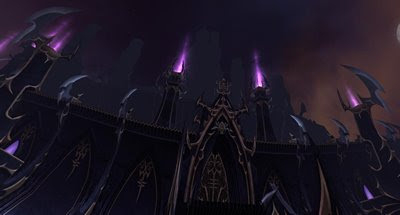 Think about it, if you could capture a fortress and you then siege it’s relevant city, but without locking down the ENTIRE campaign and focusing every bloody player to one area. So say Order take Fell Landing, then they get to siege the Black Ark, but crucially the Empire/Chaos and Orc/Dwarf campaigns remain open should players prefer to do them instead. Genuine options to push multiple zones, but this time it doesn’t lead to one giant clusterfuck as everyone is rammed into IC or Altdorf.

Extend the city downtime after a successful siege, bring in realm wide buffs for each enemy city you control (say 20% renown/XP bonus per city), sorta like we used to have in Camelot and yay! A proper campaign, that has players fighting over loads of different areas at the same time. And crucially, tangible benefits not just for winning in one zone, but for controlling the campaign as a whole.

Kinda like what WAR was meant to have in the first place.
Posted by Bootae at 11:43