There's still fun to be had in Tier 4

Had a great laugh in tier 4 tonight. It all started with us forming half a warband of Kill Frenzy and then just sort of snowballed. We were hearing that it was zerg central in other zones, so we headed over to Black Crag to try and find some smaller scale fighting. Black Crag was all blue and we figured we'd knock on a keep door and wake up some Order.

We rode up to Ironskin Skar and started battering the doors down, the few defenders there couldn't stop us and the keep was ours :) I whipped out a banner and claimed the bugger for Kill Frenzy. 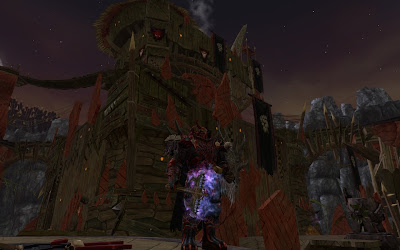 A bunch of guys from our alliance (The Evil Leage of Evil) made it over, getting us up to 3 full groups in our warband. Just in bloody time too, cos just then Order woke up. What appeared to be a full warband of Order turned up, all from two decent Order guilds (Ginnuga and Renegade Legion) and launched into an attack. Epic keep defense ensued, with things looking a bit dicey a few times, but thankfully in a close encounter we managed to defeat them after a looooong fight in the Lord room. It was a proper scrap and it was great to win against quality opponents.

Having been defeated at the keep this bunch of Order weren't going to just throw themselves at it again, oh no, too cunning for that. They had other plans it seemed and we sent our scouts out. Our lads clocked them hanging around the Rottenpike Battle Objective, waiting for it to become attackable. With us being slightly outnumbered, we hatched a simple and not exactly new plan. We'd attack them as they attacked the guards. And maybe it would have worked, except for a few rather large problems....

As we rode in to attack we realised we'd left a bunch of our warband behind us at the keep, but it was too late as the enemy could see us now. So we then in a moment of comedy gold, took the most direct path to the Order, which meant jumping down a small cliff... Small yes, but bloody high enough to take off half our health :P DOH! So we ran headlong into a warband of good Order guilds with half our health missing and our already outnumbered warband further depleted.

As you can imagine, it was a massacre :D If you've not been to Rottenpike before, it's got lots of walls and scenery you can use to your advantage, it really is perfect for defending. And those Order guys knew what they were doing. To be honest if we'd had even numbers it was going to be a tough fight, but they took us apart big time! We suspect it may have been their devious planto lure us out in the first place. :P

As the night continued we had a few more guildies and alliance members join us and a ended up with full warband going for the rest of the night. There was a shit load more fights and plenty of quality moments in both defeat and victory, but crucially for me tonight, it was all a good laugh. It didn't lag, the fights were mostly competitive and it didn't once get frustrating. Sure we did one time give up on a keep attack because of a wall of AoE at the door, but instead of suffering it we just moved to a BO and to Orders credit they followed out and got stuck in.

With our alliance warband we held onto our claimed keep against multiple attacks by a few different Order warbands and as I log off now its still ours and our allies have claimed Badmoon Hole too, hopefully the night owls amongst us will be able to finish the job and get the zone locked. All told a great nights RvR, fair play to both the Order and Destruction that made it a whole lotta fun. After having my Tier 4 morale crushed by laggy fortress crap, tonight's smaller scale action has reinspired me in a big way with Tier 4 RvR.
Posted by Bootae at 22:39