One of those moments of RvR awesomeness

So last night there was all sorts of action going on across Tier 4, I was logged in with Gashface my choppa and decided on going to Black Crag with an alliance warband (we're part of The Evil League of Evil). The zone was rapidly turning blue as Order appeared to be pushing for a lock, giving us a lot of options, but since one of the guilds in our alliance had claimed Ironskar keep in the north, we decided we best try and hold it. As we rode through the winding canyons the alarm sounded, 21 enemies were attacking Ironskar. Clearly we'd made the right decision to push for the last Destruction controlled area.
At that point we had around the same number in our warband, so rather than rush inside the keep, we planned on charging the Order from behind. They were like lambs to the slaughter (or is that Slaughtererer? Nornians will get that :P ).
They must have been a PuG not using voice comms, because it was an utter, horrific massacre. We romped through their healer camp, cutting a bloody swathe through their lines and forced the rout in moments. Much cackling was heard on our ventrilo, but we knew we'd been lucky to face unorganised opponents. We withdrew to the keep and waited to see what Order did next. 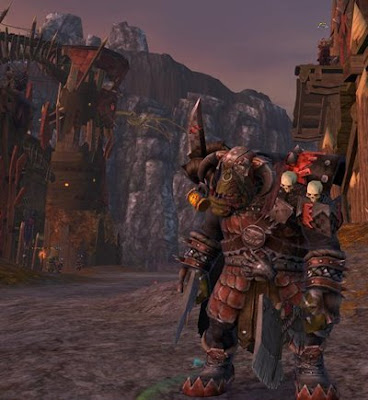 We didn't have to wait that long, as shortly after roughly half of the same bunch returned. A group of us melee types went out to deal with them, which we were in the middle of doing when we heard yelled from the keep walls (ok ventrilo) something along the lines of "Order! Bleedin' thousaaaands of 'em!".
Those of us outside left the small combat outside and ran like buggery for the keep door. A few of us were cut down, but thankfully in res range.
We were now up to a full warband, there was about 1 group of random Destruction that had just arrived and a shit load of Order had arrived. GAME ON!
From here on there are so many tales of awesome PvP combat I could tell you, but this post would become insanely long. We successfully held the keep against 86 Order with just our warband and six others, almost 3-1 odds and we held. It was truely epic, we dragged the fight out for over and hour by destroying every battering ram they deployed and using coordinated melee assaults to clear the doorway... Their ninja teams were caught and killed everytime, were gave no quarter. We rained death from above and thrust sharp pointy sticks in their squishy bits. I saw some of the most gung ho ressurection missions ever as our brave Disciples of Khaines accompanied by melee fighters rushed into the enemy to retrieve our fallen. In the end as the door respawned, we wiped them to a man and won a monstrous defence bonus (don't remember the numbers, but it was BIG).

I can't do the fight justice, it was the best defence I've been on since the early days on Karak Hirn. I salute all my follow Destruction that earnt their victory and also the Order who didn't give up despite our brutal defence. Wether you were on the winning or losing side, it still provided a long and entertaining battle.
It's nights like this that show how awesome WAR can be.
PS it also meant I got 1.5 more levels of renown and finally got to equip my Annhilator chest and helm ;) Just need the shoulders now. "Woot"! or some other such geeky expression :P 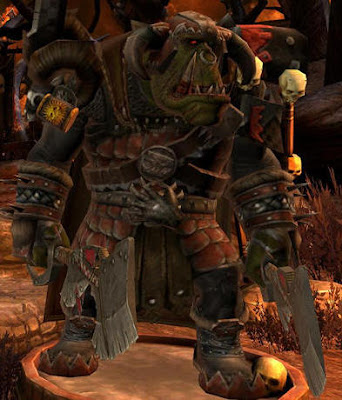