Is that a Bloodthirster in your pocket or...?

Ok another of my “wouldn’t it be great if” things… You know the WAR video? That awesome keep siege? Well that also featured a bloody Greater Demon of Tzeentch *cough* and siege towers *cough*.

If you don’t know you’re demons, it was the huge winged bugger that turned up at the end of the video. So why can’t we occasionally summon things like that for keep sieges?

What if we were able to unleash a greater demon of Khorne on people... Imagine seeing this bugger running at you: 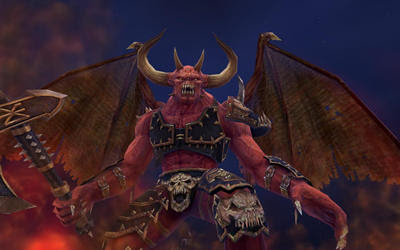 I want some funky way of summoning something really bloody nasty to aid in keep attack or defence. There would need to be some kind of restrictive factor to stop them appearing all the time, perhaps it would take 6 players to summon and they would each have to use an ability or items with a week long cool down to do so. Something like that anyway, but whatever, the end result would be a huge great lord mob with serious kick arse power turns up and goes on a rampage! Something that wouldn’t happen all the time, but enough to give everyone some OMFG moments.

Every race has an option for something. Off the top of my head things like:
Dwarf = Anvil of Doom
Empire = Steam Tank
High Elf = Dragon Prince on a dragon
Orcs = A giant or Wyvern riding Black Orc git
Dark Elves = Hydra

Big, horrific, killy stuff to inspire some panic and stir up some epic battles. It could also be a way to make Lairs more relevant, but that’s something for another post.

Keep sieges should be as epic as the into trailer :)
Posted by Bootae at 19:51