I've decided to respec away from path of Da' Wrecka. It is very good, but I'm finding it not particularly challenging to play. You run in, spam AoE, use git to da choppa to pull people in and that's about it. It's been a lot of fun and it made leveling VERY easy, but I'm wanting a bit more variety in the abilities that are worth using. Perhaps I'm missing some subtle details with Da' Wrecka, but there you go. I briefly dabbled with Da' Savage before, but it just didn't feel right to me so this time I've decided to try out Da' Hitta, which is the great weapon based mastery path. 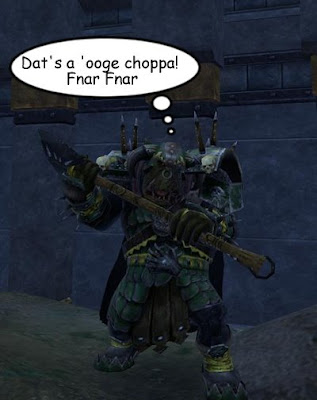 It's themed around big spike damage with a range of what appear to be quite potent debuffs. Unfortunately I've not been able to properly get a feel for it tonight, as with 2 forts down (1 each) all the oRvR was focused in Kadrin Valley. A zone now simply known as bloody Lagville. Thankfully I managed to get a few scraps in before the 2nd Fort went down and everyone and his wife descended on the zone. It got pretty messy from then on and after the northern keep battle crashed the zone for a third time, I decided to call it a night :/

First impressions are positive in that I've got lots of abilities to choose from and I brutalised some people in 1v1, but I'm not so sure how it will play out in large scale fights. I imagine I will miss Da' Wrecka's more powerfull AoE in those situations, but the proof will be in the pudding.

Hopefully I'll get some time to really experiment with Da' Hitta over the next few days
Posted by Bootae at 23:15