I've had a quality night of Choppa action :)
It started off with joining a warband and getting a few keeps, not hugely defended, but Order put up a fight none the less. Once it started getting a bit too RvE, we formed a guild tier 2 warband and did PQs and scenarios. Didn't lose one all night and had some really slick results, with us pulling back from the brink of defeat to get the win a couple of times too. There were a few big name Order guilds with what appeared to be premades in scenarios, which can be a lot of fun to go against when both sides are fairly balanced. Always good to get a decent competitive fight and doubly nice to edge the wins too ;)
As time got on and people needed to log, I went off to do some quests to hit 20. I've not really seen much of the PvE areas in Barak Varr before and on reflection there's probably quite a lot of the game world I've not seen yet. Maybe I need to do some more exploring... Anyways, after bashing a few dwarven heads in, I dinged 20 and got my mount. Yay! No more running! 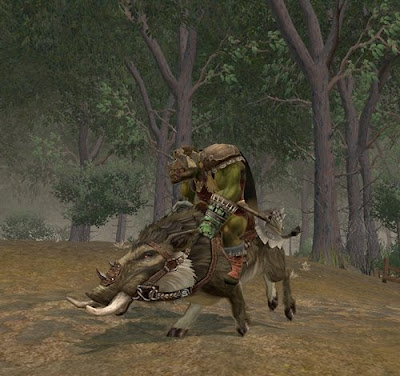 Took it for a spin around Ostland, but it was a bit late and I didn't find anyone to run over. Then I realised that the keep in Shadowlands was showing as under attack. As it was about 1am at the time it was probably just a guard being agroed, but with the Elf oRvR influence rewards being the last ones I need, I figured it was worth a look.
Man I was glad I did ;) Order had at least half a warband hitting the keep, maybe 3 groups worth. There was only 2 other Destruction defenders... I joined their group and we had some amusment pouring boiling oil on the enemy, but we reckoned we were doomed once they got in. Not going down without a fight though, oh no sir! Soon as the door was down we moved up the 2nd ramp a bit and let them agro the Lord. His AoE kicked in and so did we :D The Order tried to exploit the Lord out to the balcony, but we made hit and run attacks and the Lord wasn't falling for it either. We killed about 3/4 of the Order as the situation threw them into disarray. Then the strangest thing happened... The last few Order jumped off the battlements and ran away, leaving us 3 heroes alone in the keep. First time I've ever seen Order leg it quite like that.
I have to say nice one to Wifz and Regain that I was grouped with, it was a proper comedy moment and they were good company for it :)
I'm the sexy one in the middle. 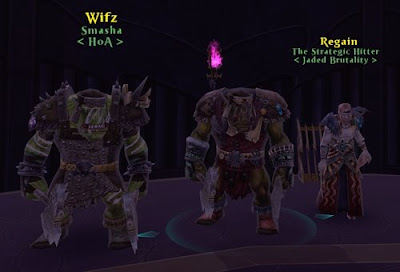 So all told a good nights Chopping. Lots of fun, lots of action and pet piggy to ride too. Quality stuff ;)
And it's made a big improvement to my Choppa's Dammaz Kron scores :D Nice session RvR stats ;) Of course now I've posted this I'm going to get bloody maimed for a month and end up on -500 :P 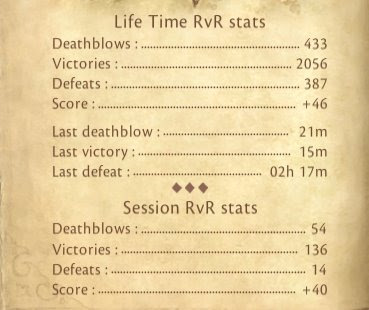