Having now had a bit of time to play with the changes 1.2 brought in, I thought I best comment on what it’s meant to me as a Chosen player.

Short version: I am a happy bunny.

Longer version: On the first day I changed my mastery spec to a Dread (rending blade) and Discord (Quake) spec. You can see my mastery and tactic set up for PvP here.

I’ve enjoyed it so much I’ve not tried out anything else yet at all. Which of course means I’ve not tested out the apparently uber tanking specs. I will get round to that at some point, but in the mean time here’s how it’s gone for me with my great weapon style spanking.

Rending Blade is now bloody great. In PvP I’m hitting for between 300-875 on every target within 30 yards, that’s not too shabby at all when you consider Rending Blade does not have a cool down and I can spam it. Combine that damage with the ticks from our DoT aura and baneshield, and ouch indeed. However I was chatting with a guildie the other day that was not at all impressed with Rending Blade, but as we discussed why, it became apparent I had a lot more strength than he did. So it would seem that damage scales up very well with strength. Check out this video of a chap hitting for up to 1.6k with Rending Blade:
http://www.youtube.com/watch?v=8B2nZDWRFKo
It’s on mobs rather than players, but still its Bloodwrought Enclave so it’s not like hitting crappy low level things.

Blast wave... I can’t say I’ve actually noticed the wound reduction this now applies to enemies, but that’s probably because it’s being lost amidst the carnage. I’m too lazy to go trawling back through combat logs and doing calculations. I’m using the ability when ever it’s available though and things are dying pretty quick, so I presume it’s contributing to my overall happy bunny factor.

Proper knockback! I like this a lot, finally we’re have a knockback on a par with other classes. Ok we have to use a tactic for it, but that does also reduce the cooldown so I can live with that. Great for breaking things up a bit, buying you some time and of course the classic punting people off bridges in Dragonwake.

One of my big favourite changes is the new Power of the Gods tactic. Auras now cost zero Action Points to use, but this tactic improves them yet more by giving you 5 AP per second for each aura running. I run 3 auras at a time using twister and a macro on my G15, so that’s a very nice 15AP per second. This has made a HUGE difference to my action point regen. Before it was a bloody nightmare, but now I very rarely run out of AP. A great change this.

Touch of Palsy has been ruined. Utterly ruined. This is a bit crap tbh, it’s our level 40 ability for Tzeentch’s sake! So now you ding 40 on a Chosen, you rush to a trainer to get your new uber level 40 ability and it’s like... err... WTF is this crap? :P It’s not really worth putting on your action bars anymore L Which is a shame because it was my favourite ability before, a great “noob” killer and a huge help in stopping people just running away from us.

There’s a shit load of other changes in 1.2 for Chosen, but I’m not going to comment on the less significant ones or those I’ve not really tested out. 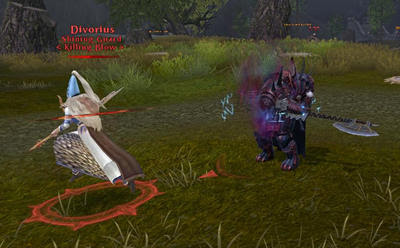 As for how this has all worked out for me, well…
In my first Twisting Tower scenario I finished top on damage and killing blows by a long way. This proved to be more than just a one off… Whilst it must be said that particular scenario is perfect for an AoE based melee class, I’ve also done noticeably better in oRvR with a great weapon than ever before. Dramatically better in fact. I’ve turned into a bit of a monster and one that can’t be ignored.
I’ve heard people complaining that all they have to do now is spam Rending Blade and yes that’s certainly the case to a point, but they’re perhaps also missing out on a lot if they’re really spamming one button. If you’re twisting properly and using things like our snare, root, Quake, Baneshield and Blast wave you’ll not only do more damage and have more control, you’ll find yourself with plenty to do. At least I’ve found that to be the case myself.

I keep hearing that solo target damage is lower, but to be honest I’m not really noticing it. This maybe because I’ve got more strength in my great weapon gear than I did before the patch, but I suspect it’s the all round changes. Since 1.2 I’ve only lost a couple of 1v1 fights, both of which were against Warrior Priests. I’ve killed plenty of Warrior Priests too, but when you go up against a good one damn tha’s a tough fight.

I am really missing Touch of Palsy. If my other CC abilities are on cool down then stopping runners is just not possible and it was one of those abilities that was a joy to use. However that’s my only real complaint and all told I’m very pleased. I used to loathe using great weapons in WAR, since without stacking ridiculous amounts of strength it just wasn’t worth the loss in survivability. 1.2 has changed that, as now I actually do enough damage to warrant it. Of course for keep defence tank walls and other similar moments I revert back to using a shield and my more defensive equipment, but that’s no bad thing. Variety in play style keeps things more interesting and I can just switch my gear and tactics to get the required job done.

With my current spec and gear I really can play an offensive linebreaker, not just the hard to kill one. I can now run in with the other tanks and smack shit out of people, I can’t be ignored or I actually have a chance to kill you. Result :)


BTW for reference, I'm running at unbuffed approx:
Strength 710 (ish)
Crit rate 20-25% depending on what I'm experimenting with.
Hit Points 8k
Posted by Bootae at 19:34