Righty the statement that great weapon is better? Nah don't think so. I'm dual wielding and doing totally fine in both RvR and PvE. It would seem, at this early stage anyway, that you can go with either option just fine. It looks like what mastery you go for will really decide what weapons you wield. I'm starting off with Path of the Wrecka for some crazy AoE of doom.

Did a load of scenarios with a half a guild group earlier, so got to give the Choppa a real good go in PvP. AoE damage is impressive, I can lay down a world of hurt on a bunch of folks. Single target damage is only ok, but I suspect this is because I just don't have enough abilities yet.

However, PvP in tier 1 is wonky... ORvR and scenarios are so full of Choppas and Slayers that I'm not getting a proper idea of how the Choppa wil fit into the big picture, other than what Mythic have talked about with the whole walking bomb thing. Presumably as I get into tier 2-3 there will be a bit more diversity in opponents. 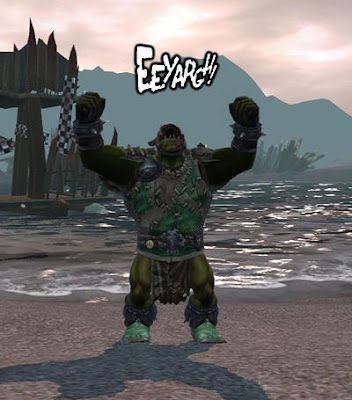