I've had a bit of a sporadic nights gaming, but managed to get Gashface up to both realm and renown rank 7. So it's too early to really judge the class or anything, but enough for a first impression.
The mighty Gashface! 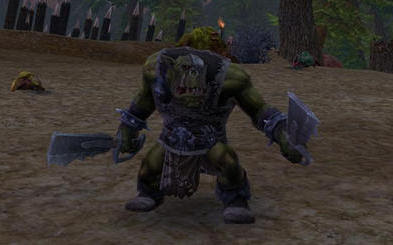 Unsurprisingly it's another melee glass cannon, but I think some people maybe surprised at quite how squishy they are. In RvR I died a LOT. This maybe due to me being a bit too interested in the Wrecka stuff, so meaning I was in full berserk mode the whole time, which in turn means I have my armour and resists reduced by 50% in exchange for increased damage by 50%. Or I could just be a bit cack.
Regardless, it was fun anyway. And I enjoyed playing the whole psychotic Orc thing, very different from the more calculated way I play my Witch Elf where stealth lets you choose your fights more.
In PvE I'm AOE farming quest mobs with ease. It seems the Choppa sure can kick some damage out.
Lots of guildies were talking about finding Great Weapons much better then dual wielding, particularly in PvP. No shocks there with the tradition in MMOs of great weapons for burst damage, but if this is the case yet again, then I really hope at higher levels dual wield gets better for PvP. Personally I want to play a dual wielding Choppa, I use a great weapon with my Chosen a lot, so a change would be cool.
Anyways I'll update again when I get more time playing with my chopper... fnar fnar
Posted by Bootae at 01:13