I so wish I had thought of that for my Choppa's name. Ahh well, too late now.

Anyway, so me and my droogs have had a quality couple of days in Tier 2. All that was missing was some weepy young Devotchkas...

LOADS of action. Scenarios popping very regularly (quite often instantly) and large scale oRvR with multiple warbands clashing over keeps. Not much of the RvE nonsense, but lots of proper RvR scrapping. It's still Choppa/Slayer crazy, but there's a fair bit more diversity in classes than I saw in tier 1. My Choppa is at level and renown rank 15 now and it's been a doddle keeping both my XP and RPs going up evenly. I'm still enjoying the Choppa, it's suitably manic in its playstyle and I think this will take over from my Witch Elf as my 2nd priority character. Lots of AoE spamming crazyness which is fun, but not very taxing. So far its really just a case of spamming Lotsa Choppin and Wild Choppin, with the odd snare or charge thrown in.

PvP wise I'm doing ok. I must admit that I can't quite shake my tank habits of trying to smash deep into enemy lines all the time, which with a squishy choppa can be more than a little suicidal. Of course for Orcs suicide is painless, but it is certainly bringing many changes to my Dammaz Kron score line (best add on ever btw), as I fluctuate wildly between insane killing machine and unsupported idiot in the middle of 4 Bright Wizards... But crucially I'm enjoying it regardless and that's all that matters :) 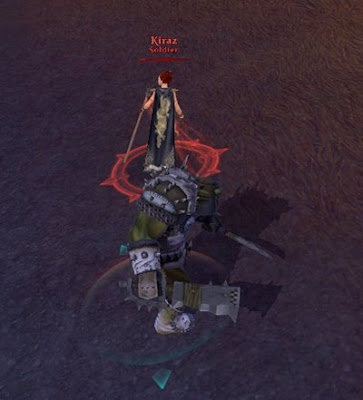 I've now had multiple 1vs1 fights with each Order class. I've beaten every class 1v1 at some point, but if I recall correctly it's only the following classes that I've had any losses against:
Everyone else hasn't been that hard to kill. I doubt that's down to me being uber, more just a case of what the Choppa is designed to do. As in to kill squishy tree huggers.
Of course in RvR and scenarios, 1v1 fights are not the norm. It's sprawling melees and uneven fights that you'll most likely be stuck into, which the Choppa can do just fine in. Sure if I'm focused fired by more than 1 person I go down faster than a Kings Cross hooker, but with some good healing and staying in control of your rage, the Choppa can really bring the pain.
In scenarios I've hit the no1 spot for both damage and killing blows a good few times, even with me as low as level 13 in tier2. Obviously those scores shouldn't be taken as Gospel, but it is an indication that something is right when you're on the winning side and you're top in both. I've seen some other Choppas (and Slayers) get some crazy arsed damage scores too.
I'm not going to say the new classes are overpowered at this level, but they're certainly competitive.
Posted by Bootae at 01:28