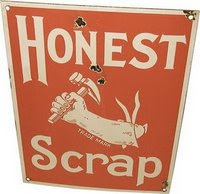 Bloody Hell! I got nominated for a Sticky Keyboard award by Way of the Chosen. Rivs must have seen me ruminating on what's better, Polish or Italian milfs. To be honest I'm still not decided, more investigation required I think, a hard task I shall not shirk from...

Doh! That's gonna get me some messed up google traffic. Anyways, thanks Rivs ;)

The award comes with stipulations….
1) When accepting this auspicious award, you must write a post bragging about it, including the name of the misguided soul who thinks you deserve such acclaim, and link back to the said person so everyone knows she/he is real.

2) Choose a minimum of seven (7) blogs that you find brilliant in content or design. Or improvise by including bloggers who have no idea who you are because you don’t have seven friends. Show the seven random victims’ names and links and leave a harassing comment informing them that they were prized with Honest Weblog. Well, there’s no prize, but they can keep the nifty icon.

3) List at least ten (10) honest things about yourself. Then pass it on!

Righty ho then, chocks away!

Keen and Graev's Gaming Blog - This was the first gaming blog that I read regularly. Keen's a real MMO tart like myself and you'll often see him getting all hyped for the latest MMO and smothering the blog with information. The thing I particularly like with this site is as Keen gets all hyped about the latest MMO , his excitement drips off the page like sweet ambrosia in Zeus' beard. Then of course as things don't turn out as well as expected, it turns into a more calculated critique of what went wrong and what could be done better. Always a good read.

Tome of Knowledge - Love the custom webcomic style artwork on the ToK, really cool. Where else can you see Mickey Mouse meets the followers of Chaos? But that's not all, oh no dear reader, the ToK also has a wealth of info to bury yourself in. Be sure to check out the flurry of Tomb Kings info over there lately.

Wizards and Wenches - How I love thee. Much like Rivs I first visted this Blog with near rabid expectation due to imagery the name conjured up of Wenches needing a good old fashioned Slaanesh style defiling. Alas that was not to be, but what I did find was quality writing with everything from caption competitions to guides on configuring your add ons. A good dose of humour thrown in too.

Stunty Stomper - Lets be honest, this blog needs an award just for the quality name. That aside, this really is one of the best WAR blogs out there. Not only does it have a great look, but it also has a regular wave of great articles. And on top of that there's useful stuff like maps of dungeons and cities and an ever growing collection of custom WAR style wallpapers.

The Captain's Blog - Not just a Captain, but an Inquisitor too! Don't mess with Inquisitor Goody or he'll get the comfy chair... Diverse WAR topics from going on Safari to event reviews, good show old boy! Plus he's on the same server as me, which of course makes him most excellent. Well that and in trouble when I find him, the damned Order goody goody ;)

Werit - What's a Werit? Apparently it's a befuddled Dwarf having lost its beer. I'm sure we can all appreciate the confused state this can cause. So how the bloody hell does Werit manage to write such a well considered blog? Articles regularly depart from WAR, but that's no bad thing as you get some tidbits about other MMOs.

Book of Grudges - A blood covered banner? Clearly a sign of impeccable taste and how I dare not overlook a blog of such obvious class. Great thing with this blog is the unbiased writing, you get a flavour of WAR without any epeen, l337 geekdom or fanboy blindness.

Tuffmudda - Where else can you get a guide to slow roasting a chicken in Lost Vale? Genius.

--
Nearly forgot the 10 things about me, here goes then:

1) I've somehow managed to get on TV a few times, but my fave is for shouting "Show us your clint!" at Clint Eastwood. The other times it were mainly just Crimewatch anyway :P
2) I am a Liverpool FC supporter.
3) My favourite film director is Akira Kurosawa.
4) I think Ultima Online was the best MMO ever made and you will not convince me otherwise.
5) I read a lot of varied stuff, but for pure enjoyment my fave author is Bernard Cornwell. Derfel Cadarn ftw.
6) I used to regularly wake up in strange uncomfortable places. Thankfully this has never included the back of a Volkswagon.
7) My current fave album is Angles by Dan Le Sac and Scroobius Pip. As a Chosen I must agree with Thou Shalt Always Kill, but I think my Chosen may have missed the point.
8) When the numbers got into 50+, I stopped counting.
9) I would say that Cheddar is the true King of Cheese, the rest are just minging tasteless crap or foul prentitious nonsense.
10) I prefer cats to dogs, if I throw a stick I don't want the bloody thing back. Stupid mutts.
Posted by Bootae at 11:17