It's a bank holiday weekend here in the UK, followed by a half-term break so I'm off work looking after my daughter for a few days and actually finding it tricky to get writing time (work lunch-breaks are my main source of time). Anyways, a few things happened worth a mention.

I've been back in Tomb of the Vulture for the first time since the patch. Unfortunately it's been pretty frustrating again...

Elsewhere in WAR, my Zealot is almost at the magic level 39 and war-tract activating time for the free level for 40. Still really liking the class, it feels much more potent than my Shaman does. If I get jumped by an enemy on my heal-specced Shaman I can usually escape, but it takes ages to kill them with kiting. The Zealot has a fair bit more punch, or so it seems anyway.


In other news, I went to Collectormania in the immensely bland city of Milton Keynes. Whilst I (obviously as a WAR blogger and self confessed Warhammer lore whore) am well aware of my inner geek, this was a bit too far over the line for me, but my wife and daughter are insane Doctor Who fans and were dead set on going because of a few people they wanted to see. Turns out it was hilarious, mainly because of how diabolically bad some of the costumes were and the delusional state of some people who really, really thought they looked exactly like Doctor Who, Boba Fett, Klingons, etc. Still even if it made a bitchy old twat like me laugh, I’m sure they were having fun, so nobody hurt there I guess. Plus it was at MK Dons stadium and they had some matches on so I got to watch football too, bonus! Oh and all the celebs we spoke to were really sound and nice to my daughter who had gone a bit shy (she's only 7), so that was cool,
My favourite moment of the day was walking through the crowd when this girl walks past and I hear her say “I don’t know why he dumped me, I’m not that much into Star Trek”. She was in a full Captain Janeway costume at the time :D


Here’s a few pics of the good and the baaaaaaad.
These guys had some really decent costumes. 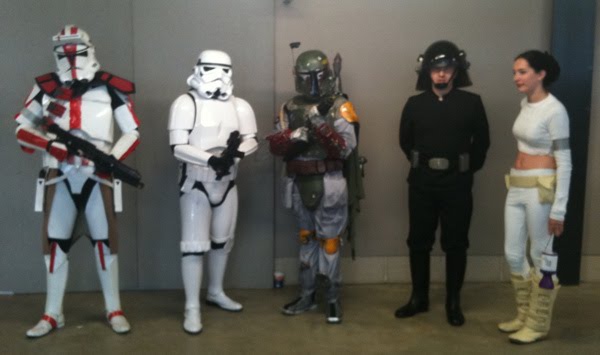 This picture doesn't get across quite how bad this costume was in the flesh. The plastic Mars bar on his head was a different colour from his skin paint... Seriously, it was comedy gold. Oh and whilst she may have a temper like one, it's my wife on the right and the Klingon on the left. In case you were tempted to make the obvious which one is your wife gag :P There were a lot of people who thought they looked like Doctor Who. But this guy was really showing off and acting like he was David Tennant himself. Alas he looked about 14 and it didn't quite work, bless his cotton socks. Fair play for trying ;) Love the retro Dalek though. 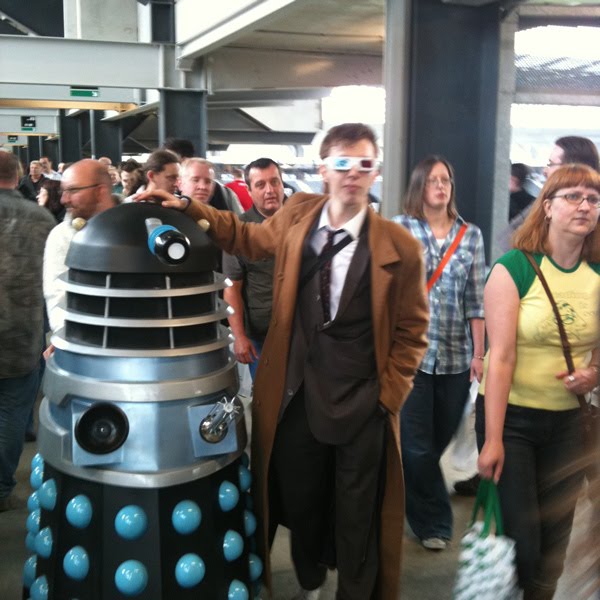 Meow! Boots you're such a bitch.
Finally, I got a PS3 and Red Dead Redemption. So I'm busy shooting cowboys, chewing tobacco and looking mean. I highly recommend you get this game. It's awesome.
Posted by Bootae at 00:21