The World Cup and Warhammer?

OK so over at Blurring Shock you’ll find the most awesome idea for a post: WAR World Cup: Order F.C.

An inspired post for football nuts like your royal Bootaeness and as such I just can’t resist making my own response. Without further ado I present to you my entry for the WAR World Cup: Atletico Kill Frenzy 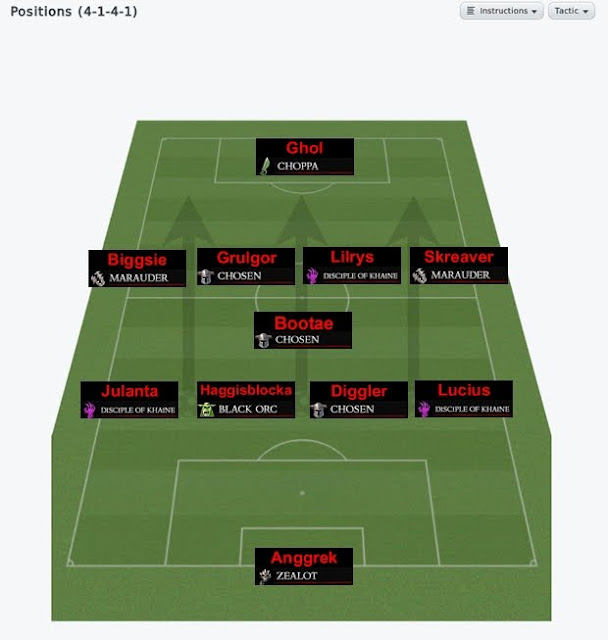 I had a tough choice with a wide array of great players available for selection (no offence to anyone not selected!), but with little time before I need to cook dinner, I’ve gone straight with familiar ground and my personal preference of a melee themed 4-1-4-1 formation. With a defensive midfielder holding position in front of the back four, it’s a team set up to be defensively solid, but is also potent going forward with attacking flair both on the wings and centrally.
Goalkeeper
Zealot – Anggrek
The teams token ranged player, defensively strong and with the skills to create quick counter attacks with precision long kicks and throws. Assuming she stops blowing up her computers that is.


Centre Defence
Black Orc – Haggisblocka
The world of WAR is slowly waking up again to Black Orcs, tough as old boots and with a potential for far more punch than people realise. Haggis is the rock at the back, reliable and swift to respond, until the booze kicks in and he goes all squeaky scouse/scottish/thing.


Centre Defence
Chosen – Diggler
The Chosen; equally happy in defence, midfield or right up front, depending on spec of course. Opposing forwards won’t want to go one on one with this duelling monster. He’s more Troll now than man; twisted and evil.


Left Back
Disciple of Khaine – Julanta
DPS, healing, tanking??? Is there nothing a DoK can’t do? Able to switch from defence to attack in the blink of an eye, Julanta is perfect for this position and the most natural dark elf I know :D


Right Back
Disciple of Khaine – Lucius
Ahh Lucius, another DoK machine of spikey uber death healer thing. Bit of troll blood in there too. Currently suspended from the WHA league, he should be back in time for the finals.


Defensive Midfielder
Chosen – Bootae
The midfield general, running intercepts with knockdowns, staggers and general bastardy. Oh and caring far too much about how his armour looks.


Left Wing
Marauder – Biggsie
Tricky buggers Marauders. They might not have the pure DPS of other classes (FIX BRUTALITY MYTHIC!), but a good player knows how to make the most of their flexibility. Biggsie has a habit of drifting out of the game into dark aged lands, but keeps his place on the team for those moments of magic.


Right Wing
Marauder – Skreaver
A marauding legend, twice actually... When the Marauder population died out due to nerfdom, Skreavs was like the last ninja, with tentacles. With Skreaver in the team the opposing side are always at risk of getting pulled into dangerous situations.


Central Midfielder
Chosen – Grulgor
Some say, if you cut Grulgor he regenerates. That only fire can hurt him, or Bilbo talking too long. Lives under a bridge. You get the picture.


Central Midfielder
Disciple of Khaine – Lilrys
Crafting attacking opportunities from the middle of the park and refusing to die in the most ridiculous situations, Lil is yet another of those DoK monsters. He once tanked Order. All of them, at once. Oh and quite calming to listen to.


Striker
Choppa – Ghol
Every team needs a psychotic forward. One of those hot headed lunatics that WAAAGHS forward and scores through sheer bloody mindedness. When Gork and Mork created Choppa’s, they had Ghol in mind.


As for a team manager. Well… Warhammer Online might have us all Tzeentchy, but I’ve always like the look of Khorne stuff. So borrowed from the forgeworld website (highly recommended uber quality warhammer miniatures) I’m gonna have us led by Mr Angry himself, a Daemon Prince of Khorne. And his mate, Bob. 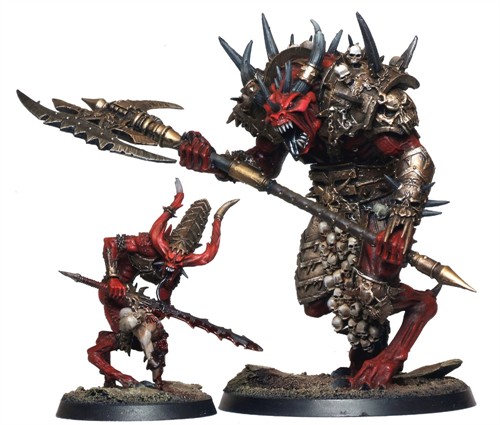