Unforgettable, that’s what you are...

I don’t think Nat King Cole really had this in mind when he sang that little ditty, sorry Nat fans, but I’m talking about those unforgettable, geek out, WAR gaming moments. You know the ones, where something epicly-uber-OMFG-like-wow-dude happens and you end up telling the tale to bemused (and possibly somewhat concerned for your mental well-being) friends. It’s more than likely that most people won’t find them that amazing, or even interesting, they’re probably just “you had to be there” moments. Heh, maybe so, but if you’re reading this then you most likely have an avid interest in MMOs and I bet that YOU know what I’m talking about. ;)

How about I share with you one of mine and in return you relive some of your special times? For the benefit of my guildies, when I say “your special times” I do not mean anything to do with Diggler, Zoggy and that ketchup bottle. And Filthiusia, just don’t go there.

Ok so this was many months ago now… It was all kicking off in Riekland in a big way, carnage everywhere and my Chosen was in the thick of it laying the smacketh down. I was right in the middle of a sprawling melee atop one of the hills, where the fight had been raging for a while, but slowly Order were starting to fold. I was fighting a Bright Wizard when he realised the fight was starting to go our way. Suddenly he bottled it, turned and sprinted away from me, I gave chase but he went straight for the cliff edge, flung himself off and landed somehow alive and stuck half way down the cliff. No doubt cackling at his lucky escape and blagging himself an utterly impossibly to reach position.


Being a gung-ho and somewhat aggressive player (read: stupid), I leapt off the cliff after him. I instantly knew I had jumped too far, but somehow I managed to spin my character around in mid air and as I fell past his untouchable position, I RAVAGED him (uppercase for the ravage haters) right in the face! WAAAAGH! Oh yes baby, killing blow in the face while falling down a cliff! I landed on the floor below with about 100 hit points to spare and laughed my arse off :D

Obviously I didn't think to screenshot it mid flight, so this will have to do. 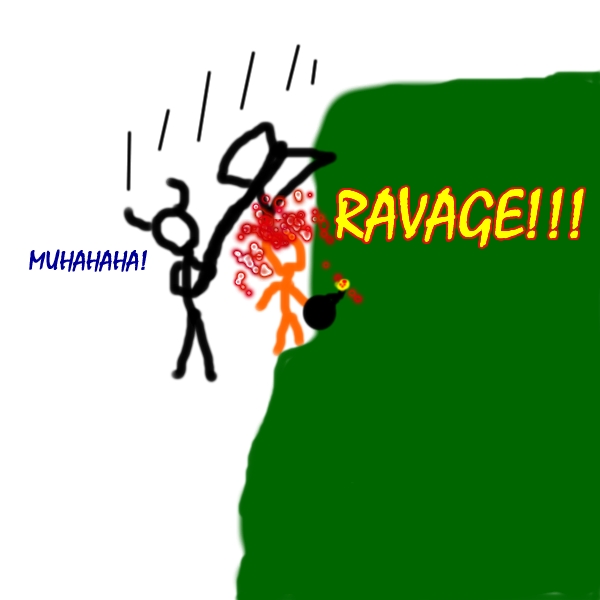 So come on folks, lets hear some tales of glory or nonsense, big or small, whatever, just the things you will always remember. Like the first time someone got stuck in the cage when a Dark Elf battle objective locked and you spammed /lol at them, come on, you know you did...
Posted by Bootae at 14:48