I wrote recently about my thoughts on how Mythic should be “Changing Tier 4 zones from OK to awesome”. I was suggesting not only opening up the zones to become full oRvR enabled, but also changing all the existing quality scenery from completely unused Public Quests into PvP themed objectives or events. This would give the rest of the zones more purpose, would spread the combat out better and help to reduce lag, as well as give alternatives to the constant and oh so bloody tedious zerging. In the post I included some screenshots of some of the awesome wasted scenery from Kadrin Valley’s PvE areas, which after posting got me thinking a bit more about how much of the game people just don’t get to see and what amazing potential there is for RvR if those areas lost the PQs and gained some PvP hotness.

As a result, I had a chat with Biggsie and we decided that we would go exploring, taking nothing but our heavily armoured (or mutated in his case) arses and a camera (AKA printscreen) across the Tier 4 landscape on a journey of visual stimulation. As we travel the lands, we’re going to post our findings between our two blogs with a series of articles showing some of the cool scenery and potential for RvR goodness that we encounter. This includes sneaking around the Order PvE zones, so certainly for me I’ve found things I’d never seen before. Didn’t find any players in the PvE zones mind you! :P

I’m starting off with the Chaos Wastes and Biggsie is visiting Reikland which he'll be posting very soon, so keep an eye on his blog. The Chaos Wastes are a mutated and rather freaky land, that’s also very, very blue. In fact it’s safe to say that this is a landscape that went down to the Crossroads and fell down on its knees. 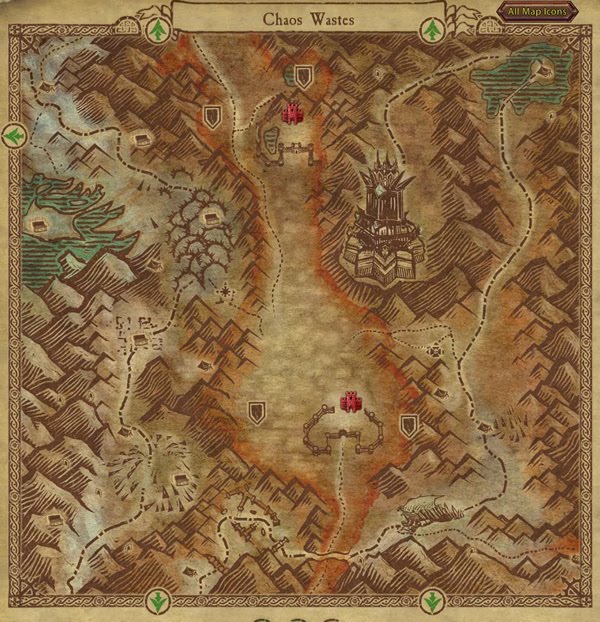 This is how RvR is limited at the moment. Note it's a very open zone, so within the red boundary you are able to roam all over. 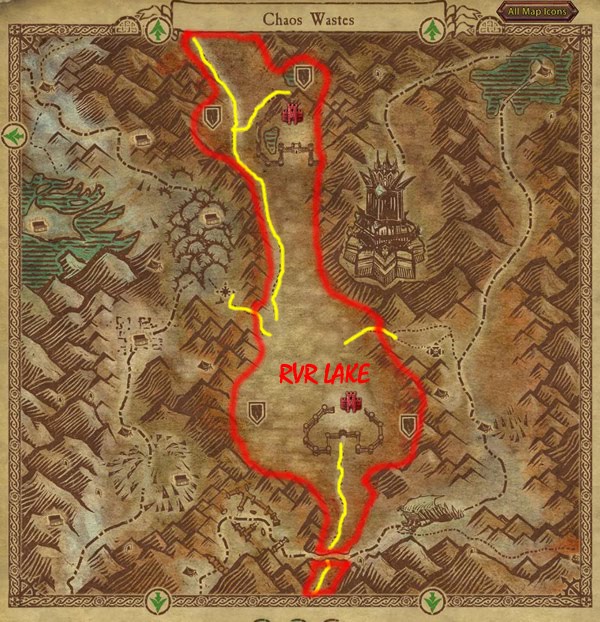 And this.. is what it could be like.. A huge zone with an incredible amount of freedom. I've marked the roads, but they're really not very restrictive in the Chaos Wastes. Unlike my first post I've not marked where I think other objectives should be, simply because there are just so many options. Basically anything marked with a Public Quest marker, camp or scenery will do! 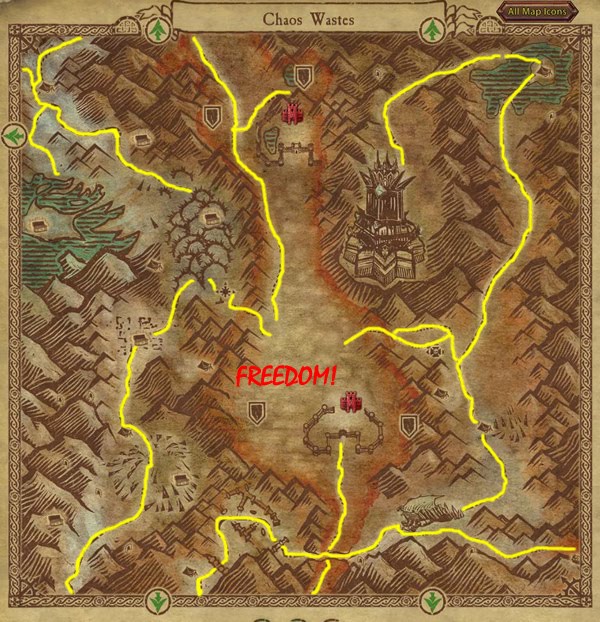 Click images for the full size screenshot.
There are load sof strange looking castles, towers and ruins scattered around. They could be used for something like the keeps we get in RvR, standard objectives, or for RvR driven events akin to the new city siege. Imagination is the only limit. Posh door on this one below. The Wastes are covered in these thorn bushes gone mad, they're a real wasted opportunity. You could have some crazy fighting amongst them, with line of sight being broken and chasing people through a forest of thorns. 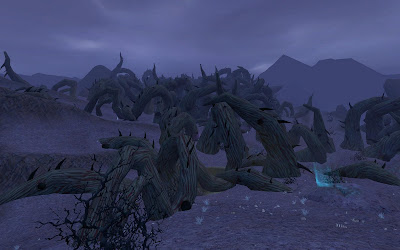 I love the look of these towers. What a waste of a great bit of scenery! By the way, check out the snowflakes... Chaos Stars! Very cool. 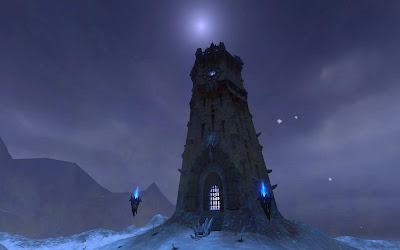 All over the Chaos Wastes you'll find this huge metal circles, I'm not sure if they're meant to be man made or if it's the Chaos Gods chucking weirdness around. Not got any PvP use springing to mind, but they look great. ;) 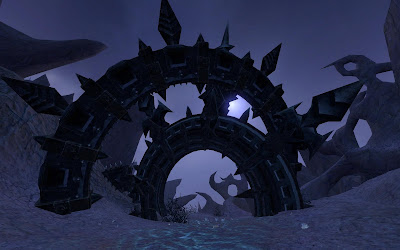 This temple (?) is on the Order side, but you can see it for miles around. It is absolutely huge, and... uhm empty? 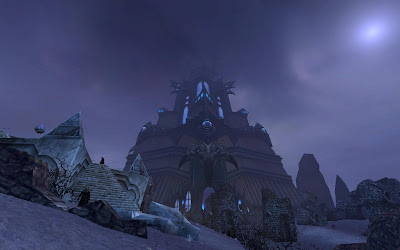 Yup, empty! Well apart from like 3 NPCs. Surely we should be fighting in there no? 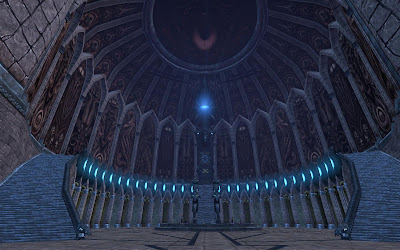 It's worth a third screenshot, check out all the detail in the walls. All this effort and most people will probably never go in there, 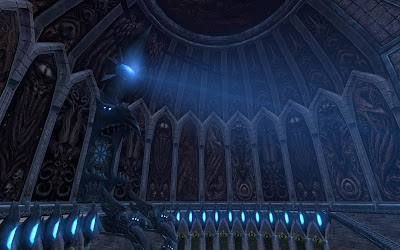 I found this like field of frozen or petrified bodies. I've no idea what it's about, but it was a pain to move through. Perhaps getting stuck here would be too much of a headache in PvP. Or maybe it could be the point of it... 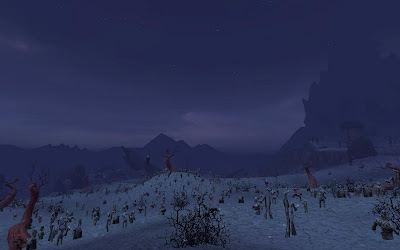 Looks like the Maw of Madness scenario. Like the thorn forests, this is another bit of terrain that could be fun to fight in. We just need a reason to do so. 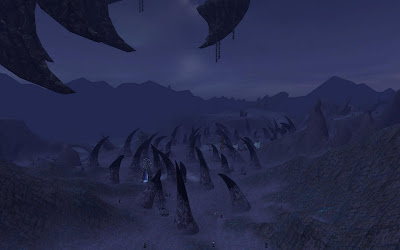 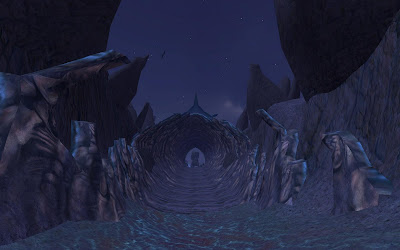 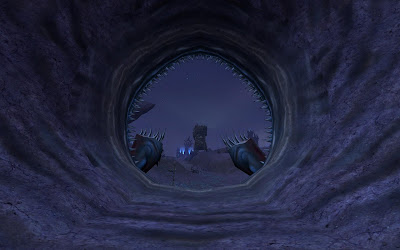 No idea what this once was, it's dead now anyway. I suspect it was angry when alive. 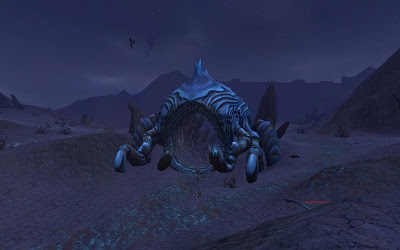 Another of those great looking towers. Another opportunity. 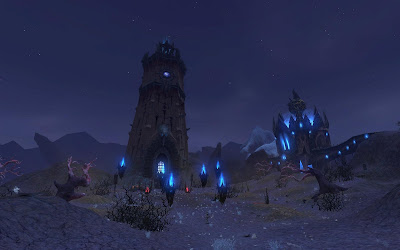 This one is the first of the towers I pictured above, obviously from a distance. The water you can see, some of it is frozen, some not, but I swear it changes. Either that or I just got confused. Imagine that though, fighting in a zone where the water is sometimes solid... 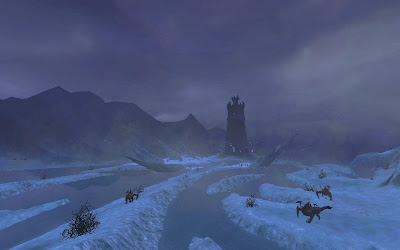 And here concludes my little tour of the Chaos Wastes. I'm sure some people will have seen all of these areas before. However if you're started the game after Land of the Dead was launched then it's quite likely you leveled from 25-40 there and/or the RvR lakes, in which case you had no reason to visit any of these places. Which I think is a shame.
Posted by Bootae at 13:09