A common topic for my ramblings is the small size of the oRvR lakes and how so much of the tier 4 zones are completely wasted, empty and utterly devoid of life. Admittedly I originally wanted to play on a full PvP server, but there was a lot of scaremongering about the chicken system and we decided not to risk it being a disaster. To be honest the difference turned out to negligible, since even on full PvP servers the oRvR lake is no bigger and Land of the Dead emptied the PvE quest areas anyway. Today I think that regardless of my old bias WAR desperately needs to expand it's Tier 4 oRVR lakes.
Well it’s all good and well saying that and go on about how they could be better, even bashing Mythic for it, but I figured I should also post to demonstrate this more clearly and give some examples of how I think they could be improved. As I’ve said before, I think the Tier 4 zones should become fully oRvR active, it would give us a lot more to fight over and there is absolutely nobody using the zones for PvE anyway, since levelling in Land of the Dead (a fully oRvR zone) is a much more efficient way to get XP. While thinking and preparing for this article I scouted various Tier 4 zones to make sure this is not just my assumption. On my travels scouting multiple zones in detail and at a range of difference times and days, I have seen ONE Choppa in the PvE areas. This is on Karak Norn which is a very busy server. So I can say with confidence that there is barely anyone doing any Tier 4 zone PvE or their PQs (Public Quests).
I decided I’d use Kadrin Valley for this example. 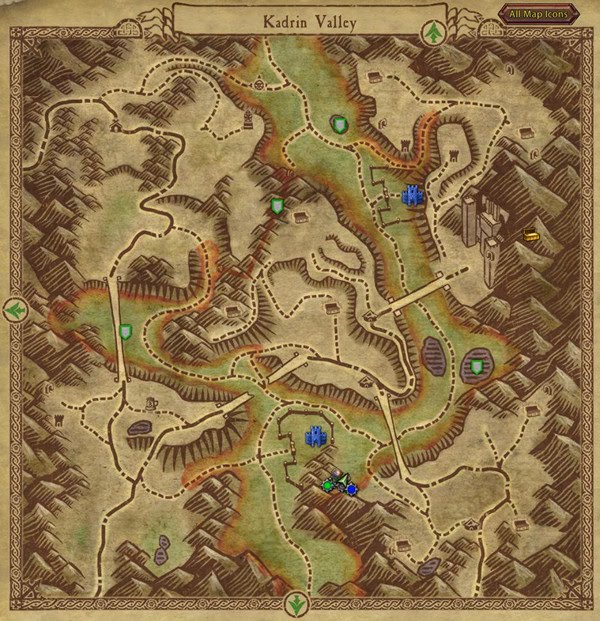 It’s a great looking and very well themed zone with some mark out moments for the Warhammer lore whore in me, but it’s oRvR lake is somewhat flawed. I've highlighted it below: 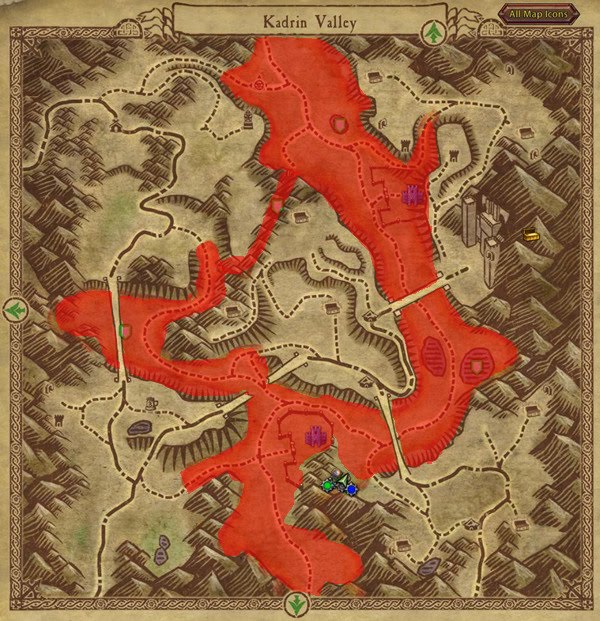 Basically it’s a big circle and that’s about it. There are a wide range of ways you can travel through the zone as a whole, yet it's only the yellow roads below that are RvR enabled. 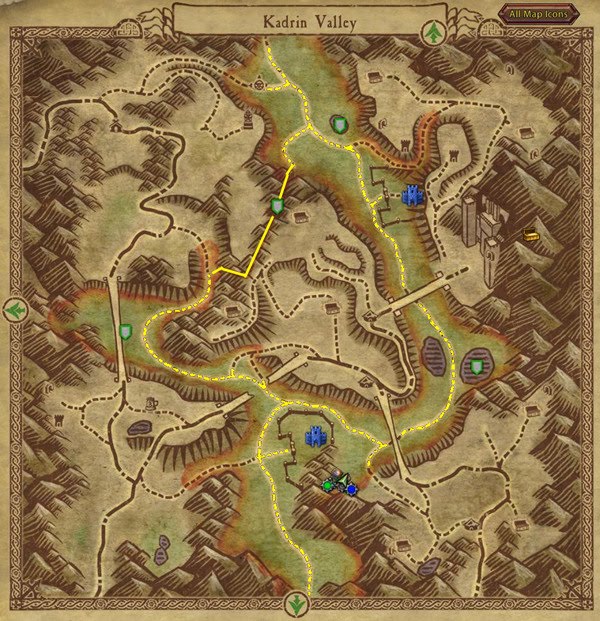 You can take alternative routes through the PvE areas, but it is rare anybody bothers. I think this is because they are PvE; people don’t bother learning their way around in the first place, there is no sense of threat when in them, there are no RvR objectives in the PvE area annnnnnnd as alternative routes... they just don’t work very well. You can sneak across to get behind the enemy, but with all the objectives on the big circle oRvR lake, the enemy will just zerg around to you in no time anyway.
So what would happen to our possible paths of travel if we made the entire zone oRvR enabled? 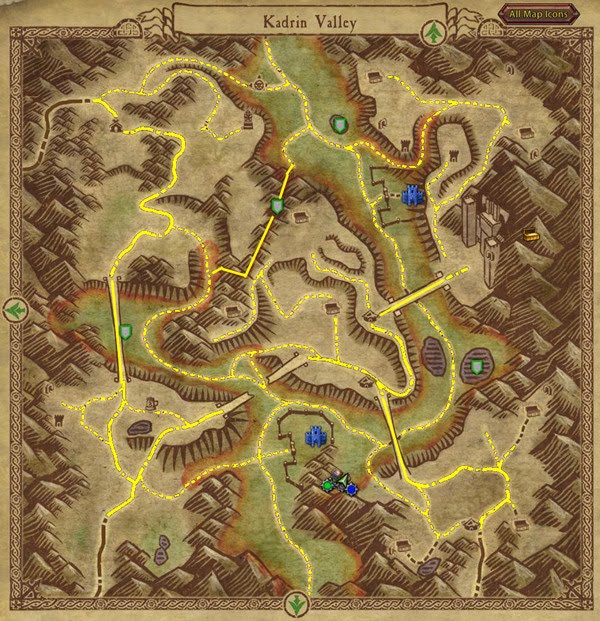 Bloody hell! That's suddenly become a much more complex zone, with a massive array of places to go, but as of yet no reason to do so. It still leaves all the oRvR objectives around the circle and the other routes are still of no use. So what we need to do is add a few more objectives (in a general sense of the word) to what was once the PvE area. I'm just going to add 4 for now, though I think we'd want to add more to the left side of the zone. 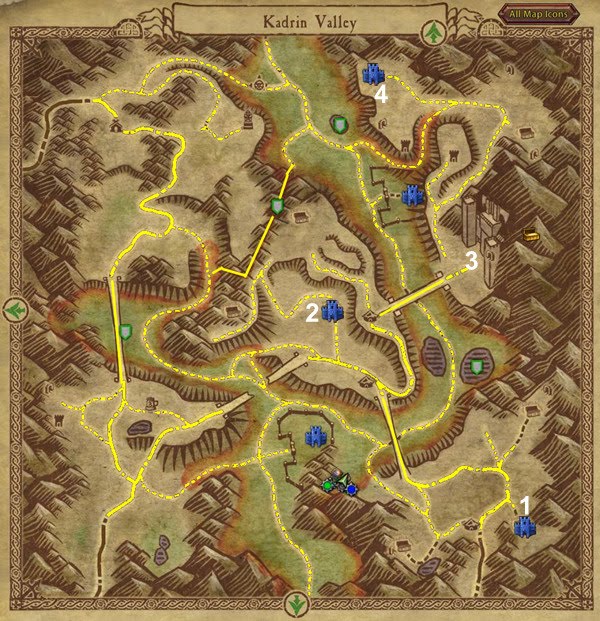 You will notice I've used the keep symbol. The reason being is the zone already has loads of keeps and fortified buildings in it. They're PQs mainly, empty of course, but with more character than the ones in the oRvR lake. It's actually a bit of a travesty that they're not being used and that so many players probably never even see them.
1) Tucked away in the south east is this castle with a classic dwarven style keep and other buildings. It doesn't have to work exactly as the old keeps, perhaps it would have multiple keep Lords spread around that need to die within a certain amount of time between each other. Or something... 2) Here we have yet another keep, but with a different awesome look and interestingly it's at one of the highest points in the entire zone, which is a loooong way up. I really like the giant statues and clouds that drift around. 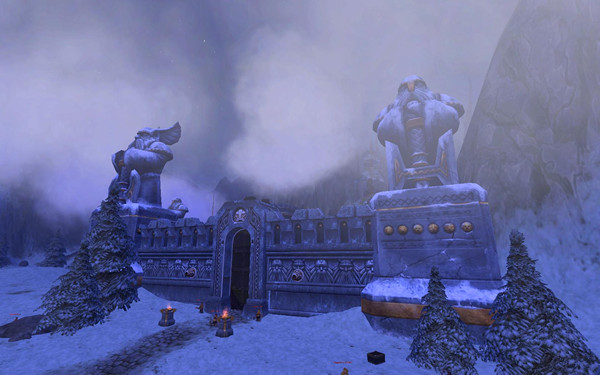 3) The Slayer Keep. A massive fortress, which should be so awesome, but is just another empty PQ. It's gagging for something cool, not just another keep or fortress. Perhaps it could be turned into some kind of RvR enabled PQ, inspired by the City Sieges? A big RvR PQ of some kind... 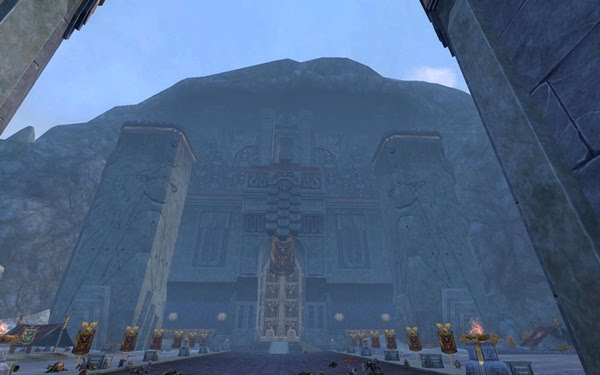 4) A dwarven brewery... Stunties take their drink very, very seriously. As such these places are heavily fortified. Perhaps it could just be like one of the normal battle objectives or could be turned into something more akin to a Dark Age of Camelot tower? 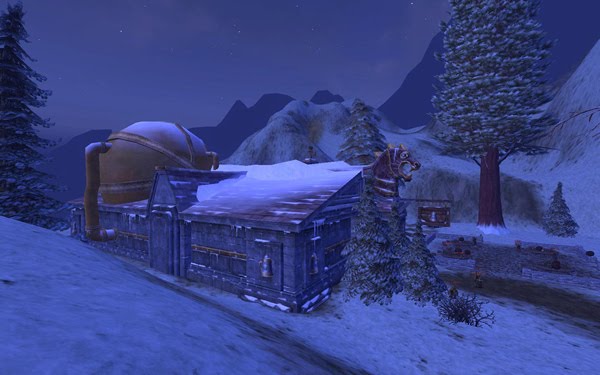 I found loads of other things I could have used here. And I mean LOADS.
By adding these (and more) extra objectives, using the existing excellent terrain, we now have reasons to fight all over the zone and not just zerg round a bloody great circle all day. There's room for zergs, warband and small group play, all with choices in what to do. I’m sure whoever designed the PQs may have a tang of sorrow at my suggestion to remove them, but sorry chaps, they simply do not get played. You’ve given us really cool looking stuff, but the system that uses them does not give us any motivation to go there. Change them from PvE to PvP and not only do you give reason to your high quality graphics, but you also reinvigorate an entire zone and oRvR itself.

Most Tier 4 Warhammer zones are like this. The terrain is awesome, but we get forced away from so much of it and spend our game time ignorant of the amazing art and design in vast swathes of WAR's game-world. If we want XP we do land of the Dead, if at 40 we want PvE we do instances, we don't ever do PQs. WAR's existing landscape could be the most amazing RvR zones ever, they just need a little tweaking and the decision to really make WAR's Tier 4 about PvP.
Posted by Bootae at 17:41