I mentioned the other day that I’ve been playing a DPS Shaman recently. Where the Magus proved to be frustrating, the Shaman with a DPS spec and a mere RR50 (now 62...) has been an absolute revelation; it’s far more effective and entertaining than I had expected. In the past I had played my Shaman as a healer, since it was just not possible to get enough DPS related stats at his low RR, but the recent changes to WAR’s armour restrictions and the new jewellery set have completely changed that.


This selection seems to be the best combination of set bonuses to maximise my damage and gets me to around 250 damage bonus, which for someone at that RR is not too bad I think. I’m not far off getting Worn Sovereign now too which should make quite a difference too. Whilst this seems pretty good to me, if anyone has any ideas on improving this further, any tips are more than welcome. 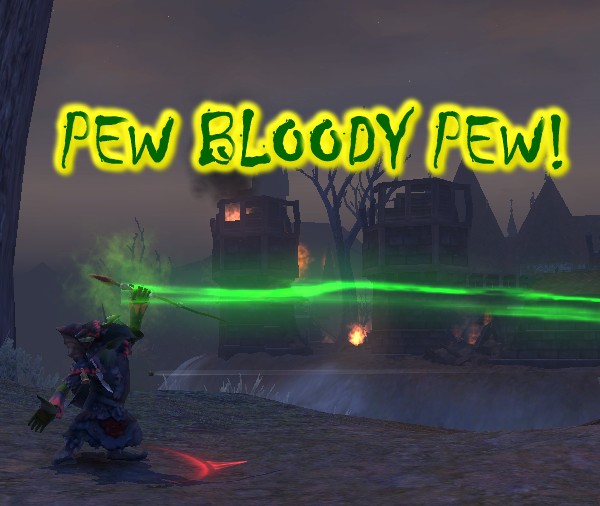 I do of course switch to healing tactics and armour if in a situation or scenario where there aren’t enough healers, no point choosing to lose, but wherever possible I’ve played as DPS. Unlike the zealot, a DPS Shaman doesn’t become a particularly effective healer just by switching, so how you spec is more of a rigid play-style choice. Spec wise I’ve dabbled with the classic tri-mastery set up, which has a lot going for it and gives more survivability, but at the moment I prefer a balls to the wall Gork with Green spec. Sure, it’s a fairly selfish spec to go for and isn’t making the most of the Shaman’s unique abilities, but I don’t care, I’m having a good laugh with it. That said, I am tempted to try out a more Green focussed spec and get more from the Shaman’s lifetaps, I’ve heard some good reports on it and since I do a lot of solo roaming, it could work quite well for me . 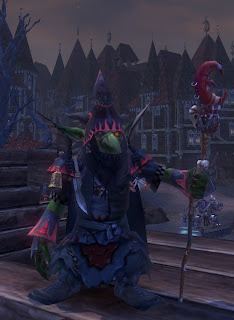 Regarding the solo roaming; whilst it’s best to run from RR90-100’s with a clue, I’ve done rather well in 1v1 fights in general and been able to earn some very nice renown just doing my own thing. Group play with people that know I’m in DPS mode has been very good too and in particular one night playing as a DPS Shammie tag team was hysterical and very successful indeed.

One thing you will get though is shit from people who are offended that you dare spec for DPS. Now, if you’re point blank refusing to heal even when there are no other healers or if when DPS mode you’re not using your lifetaps and mork charged instants to help out, then you probably deserve to get called a twat. However, that doesn’t excuse those occasional morons that will give you shit even if you and your team are doing well. For example the other day I was DPSing in a scenario, we had people healing and things were going rather well. Terry Fuckwitt Chosen (name changed to insult the idiot) then decides to complain about “fucking LOLhealerDPS”. I didn’t bother replying and let the result do the talking, We won comfortably I finished with over double his damage, had 3x more killing blows and in fact I healed for more damage he did. Oh and to make it somewhat ironic, by the look of his character and how squishy he was, he must have had a LOLDPS tank set up himself. So even when you're doing nothing worth any crap, some twats can't resist it.

Anyway, to sum it up, the Shaman is an excellent class to play even at low RRs. It can be effective at both DPS and healing, though not really both roles with one spec. Healing is the fastest way to gain renown and whilst still enjoyable, it’s not quite as much fun as playing as DPS (not that healing shammies are dull, far from it), however DPS spec is a fair bit more challenging to play and earn renown with. Be sure to make the most of the career’s mobility, practice and you’ll do well. It’s early days for me and I’ve got lots to learn, but it has been great and the gear gap has barely been an issue. I can fully recommend the Shaman for any returning or new player.

Though if you do spec DPS, don’t refuse to heal when you need to. Like I said above, don’t choose to lose.

UPDATE! In other news there's a new development thread up about new locations for scenarios. Check it out here.
Posted by Bootae at 19:29