Charge of the light (green) brigade

There were hundreds of the buggers… a monstrous zerg of Order red names sweeping across Black Crag like a swarm of locusts with the munchies. The armies of Destruction were nowhere to be seen, that is apart from my 5 man group. The odds were indeed utterly stacked against us. Yet there was hope, not of victory, but of fun...

What do you get if you combine a giant horde of Order and a 5 man group consisting entirely of Choppas? A game of WAAAGH Target™ of course! 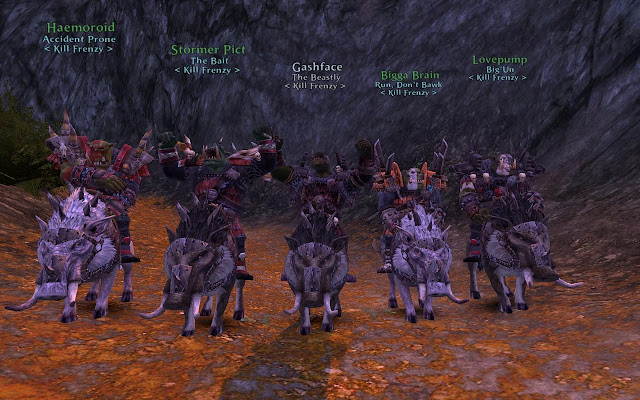 The rules are simple. Make sure your group is mounted, have one person pick a target in the middle of the enemy zerg (it has to be the middle for the challenge), ideally the target should be someone well known. Then as a unit you charge across, spamming /waaagh at the target as a signal of intent (the enemy must be able to recognise who you are going for). From then on it’s simply a case of doing everything you possibly can to kill that target. You will die, no question there, but a successful charge will earn you more renown than you give the enemy and provide you with much comedy on vent. It’s the community on your server that makes the game tick, but it doesn’t always have to be a serious rivalry, so why not give your enemies a bit of a laugh and a few WTF moments as your green WAAAGH charge takes on insane numbers.
Pointless? Utterly.
More fun than logging off or guarding mailboxes? Totally.
Last night there was much /waaagh and we got our target with every charge, plus a few extras on some occassions :D I don’t remember all the target names, but a special /wave to Moonthief, one of our first targets and a long time member of the guild's fave Bright Wizards. ;)
Posted by Bootae at 13:38