People got all excited when it was announced Dawn of War 2 had Tyranids, but tbh if you want to fight some Bugs, try a Fortress take :P
Tonight on Karak-Hirn Destruction guilds & alliances, big and small, worked together and Operation Snotstorm went into action. It had been planned it in advance, our faction's leaders had worked hard to get everyone involved and still keep it secret. Unfortunately it started a bit too early for me, but soon as the sprog was sparko I grabbed a particularly good bottle of Merlot, a comfy chair and got online for an evening of pixel death and mayhem.
I logged in just after the Reikwatch Fortress fell to our forces. Awesome result this, being the first time Destruction have taken a Fortress on our server and possibly the first time one's been killed on Hirn without the Lord being bugged down to the lower floor.
The attack then moved to Kadrin Valley, for a mixture of big fights and then sitting around doing nothing for ages. Same mixture of excitement, lag and then boredom as with all with lock down attempts, at least until the patches come in. After a while it became apparent we werent going to get KV (stuck between 90-96pts for like 2 hours), so the order was given for us to move on to Etaine. We switched zones quickly, Order were on the backfoot and in no time at all, blam! We had the zone locked. With a coordinated large scale attack on Shining Way Fortress, we quickly battered down the doors and got ready to hit the Order tank wall by the keep room. 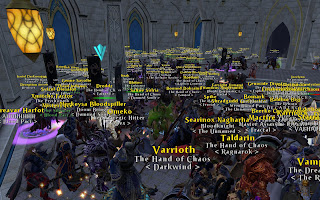 Our mob smashed into their tank wall, our DPS raining pain on them. Order put in a good attempt at holding us, but it didn't take too long to break their wall. We started moving to clear all the Order from upstairs and then... 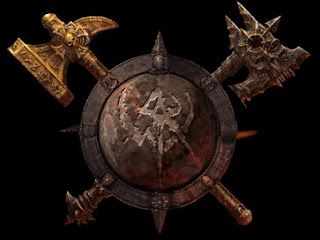 You are bloody joking me... Everyone gets kicked back to character screen.

But ok, we'll cope, we can get back in quickly and continue. Loading... come on... Yes! We're in! Hmm, loaded in at the warcamp, but ok we can still do this! Oh wait... No we can't. Not only are the Fortress doors back up, they are now UNATTACKABLE. lol :P

It had been a cool night, the moments of boredom were being forgiven due to the big chance of our server's first City siege being in sight. But it turned into a massive anti-climax when, first the game couldn't take our numbers in the fortress choke point and then the game bugged the forts to make any futher progression impossible.

On our server the vast majority of Fortress attempts have either bugged out, zone crashed, lagged to hell or been captured through cheating (accidental or not). Tonight I've logged off mildly peeved, but still positive as I'm confident Mythic will sort things out. However I saw a lot of people who were logging and were very pissed off. Understandably tbh too.

The next patch needs to bring some serious improvements to oRvR. Fortresses don't need sorting in a couple of months, they need sorting out right now.