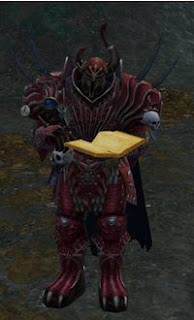 You can find them over at Mythic's site here.

I'm just digesting them now, nothing that's immediately made me think oh bloody hell.
As you can imagine I leapt straight to the Chosen bits. Here's my thoughts on our changes:

The nerfed
Dire Shielding: This Tactic will no longer cause Bane Shield to stack when multiple Chosen in the same group use the ability.
This ability will now deal Spirit Damage. Additionally, the damage effect on Bane Shield will now only trigger a maximum of once per 2 seconds per character affected
I don't think we could argue that bane shield was a bit over the top. It was always going to get nerfed and there's no point crying about it.

Something that does hit us a bit is I noticed abilities that increase spell build up will no longer effect instants. I dropped Corrupting Horror a few weeks back when I changed to a Discord/Dread mastery spec, but when I did have it I have to admit I was kicking seven shades of turd out of healers rather easily.

Hate from auras which affect all group-mates will now be credited to the individual group members, instead of all to the Chosen themselves.
Threat generating from buff auras is no big deal anyway, so like whatever.

Challenge: This ability no longer requires an enemy target.
This is more of an improvement than people may realise. Small time savers can make the difference in manic fights.


A lot of our stuff has been changed to spirit damage. I'm not sure how much of an effect that will have, only testing them out for real will say I imagine. Also it looks like auras turning off has been sorted out, lets hope it also fixes the times other than zoning. If so.. much rejoicing.


I'm generally of the opinion that Chosen are actually pretty well sorted. I read lots of whinging on various forums, how we can't compete with a squirrel in PvP, that we can't tank anything, blah, blah. Yet I and most of the other Chosen I know have all tanked in places like Bilerot and Lost Vale without difficulty (hell I've even had to step in after a Blorc died and succesfully tank LV bosses with a great weapon equipped). I've not had any problems in RvR of any real note, other than fighting Ironbreakers, but then we're all jealous of IBs :P Sure, ideally I would have liked to see the mechanic for aura twisting improved, the Corruption and Dread mastery paths made more appealing , and have an uber AOE knockback that does 12k damage added.. But like Snort has pointed out for Black Orcs the sky is not actually falling.

For now whilst I'll reserve full judgement until I get to try out the patch, all told I'm fairly happy with the Chosen patches. Could it have been better? Yes. Does it look like Chosen are shite? No. This of course won't be popular with a lot of people and I'm probably therefore a noob, moron, etc for doing fine with my class as is.
Posted by Bootae at 14:39