Love you to much to leave, don't like you enough to stay

Over the weekend I was chatting to some guildies in RIFT (yeah I’ve reactivated for a little bit, more on that another time) about all the different MMORPGs we’d played. After listing what I could remember of my ridiculous list of games played (more a badge of shame than honour…), one of them asked me; “What made you leave all those games?”

I gave a fairly brief answer, something about getting bored, but really it’s a pretty good question and deserves a tad more thought for a better answer. So after a little pondering, I think there are probably 3 main reasons; boredom, disappointment and distractions.

Almost everyone gets bored of a game eventually. Even with those games you really fall for and bury yourself in for years, eventually they all just wear a bit thin. This was the main reason I quit WoW, sure there’s lots of other things about WoW that I wasn’t so keen on, but the main thing was simply being bored of raiding, dailies and the entire game-world. Boredom was also a big contributor to my quitting WAR, mixed in with a reasonable chunk of disappointment. However, let’s not forget that some games are just plain boring by design, oh hello Lineage you horrible pile of wank.

Disappointment is, by a country mile, the most common reason for quitting games. Over the years there have been sooooooooo many promises by so many MMOs (and their player community hype lords) and nearly all of them simply don’t deliver or have fundamental flaws that ruin the whole experience. Or they’re just buggy piles of shit. For example: Anarchy Online, Age of Conan and Neocron. There are also those games that have enough good stuff to stick with for months or even years, but then mistakes are made and the developers ruin the game or for whatever reason it just starts moving in the wrong direction. Star Wars Galaxies, WAR and Ultima Online being the prime examples of that situation.

Then there’s the constant itch, the distraction of other games be they new or that one you’ve been meaning to try out for ages. Of course most of them will lead to disappointment, but hey for now LOOK AT THAT GREENER GRASS!!! For me this is rarely the only reason for quitting a game, but it is often a contributing factor. The first time I quit WAR probably wouldn’t have happened if it wasn’t for RIFT and its beautifully slick beta. 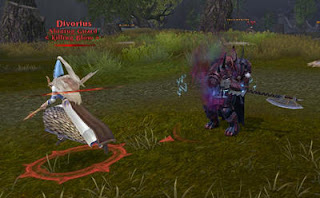 Actually there is a 4th reason for dropping a game. Sometimes real life stuff just makes online gaming unfeasible, which was the main reason I quit DAoC, but that’s a bit more of a random unpredictable thing.

So if I was to list a few of the well known big players from my MMO past and why I quit them, it would look something like this: