The original post on Destructoid can be found here, including a release date planned for March 2013. Or if you cba to click the link merely read my copy pasted version below:

* Relic is lending a very small hand in the overall development of dmo. Winking, a chinese based developer is also on board. They helped with Space Marine as well.
* Vigil is doing 90% of the work. Most of the shared work load is art, and animation.
* Spacemarine is built on the same engine as darksiders (and darksiders 2 respectively)
* Dmo is using the same engine, with gameplay (at least combat) akin to Spacemarine.
* Contrary to what I was told, the art style is NOT like Spacemarine, rather the whole game is more like darksiders (1 & 2), very stylized. The videos released at the last E3 are fairly accurate to the current state of the art style. Less realistic.
* Revision to what I was told by the rep, is that Spring 2012 is unlikely… maybe for more announcements on the game’s progress. Though a Darsiders 2 release in spring is likely, Vigil is working on both.

* Races broadly put into forces of “Order” and “Disorder” similar to 40K World-wide campaigns.
* The “spacemarine” is a class, with a chaos counterpart.
* Tactical, heavy, assault as specialties.
* Each class starts as something familiar, and through progression changes.Ie. Scout to Marine
* Other classes include: psyker, techpriest, and assassin
* The assassin starts as a guardsman-esque character.
* Chaos have similar counterparts, cultist themed.
* Instead of an assassin, think demon host.
* Orks are with Chaos (disorder), Eldar are with the Imperium of man (order)
* Ork class rundown: Nob, mekboy, runt herda, mad dok
* Eldar class rundown: Scorpion, Avenger, Warlock, Reaper
* Expect Tau & Dark Eldar later, likely an expansion, though dark eldar npcs will be present on release, as well as Necron, and Tyranids. (Interesting idea, going for the ‘faceless’ races as NPCs, though I suspect you won’t be getting quests from the Swarmlord!)
* 60 character levels.

* A crashed space hulk will be one of the zones.
* Another zone will take place on an Imperial Cruiser, and Chaos Cruiser.
* Expect several instanced missions much like WoW, as well as open world.
* It will include instanced & open world pvp.
* Players will be able to dual weild things like pistols and melee weapons… yes that means two chain swords.
* The featured chapter is Black Templars. (As evidenced by the banner art)
* The featured chaos god is Khorne, at least for playable
* Word Bearers will also take a major role in the Playable chaos faction
* Nurgle & Fabius Bile will have a big Chaos NPC presence. (I suspect not Nurgle himself, but perhaps Typhus?)
* Possible shooter/RPG mode controls, like StarTrek Online.
* Third person action, plays like Gears of War/Space Marine mixed together for shooting.
Melee is more like Space Marine/Darksiders, with the target lock on.
Blocking melee attacks is a maybe, sheilds may be NPC only.
* NPC creatures vary from: Necromunda like humans, Chaos Cultists, Dark Eldar; from Grotesques to Warriors, Chaos Daemons and beasts, Orks, Grots, Guardsmen, defected Guardsmen, most of the minor Demons, Dreadnoughts, Tyranid Warriors, Genestealers and more.
* Forgeworld things may be present. Thunderhawk, terrain sets, Aquila landers, FW-esque equipment on vehicles.
* Environments range from snowy mountains, to the innards of a crashed space hulk… from cities destroyed, and orkified, to ancient eldar cities, overgrown with nids… from ancient battlefields, littered with the carcases of Titans and tanks, to a hive city, nostalgic with necromunda…. from the halls of Imperial Cruisers, to tge desecrated throne rooms of Chaos.
* Everything is large, beefy, and sticks to 40k very well. People already invested in the background and game will progress at a snails pace, as we will be distracted by everything.
* Left mouse uses the weapon in your character’s left hand, Right mouse uses the weapon in your character’s right hand. Rather cool mechanic.
* All abilities have a cooldown… No spamming your “3″ key like most MMOs. This will likely annoy WoW diehards. This pleases me.
* Melee combos – dual wielding gives new moves
* There is sprinting.
* “Guilds” will be present.
* Team/party/squad size is 5
* “Raid” size is 50… subject to change.
* Ranged weapons have infinite ammo, but there is reloading, overheating, venting, and reloading.
* Weapons rarely get to take full advantage of their range when inside… lots of cover and turning corners, it’s very dynamic.
* Hero classes are possible, unlocked once you get a character high enoigh level.
o Imperium: Grey Knight
o Chaos: Chaos Sorcerer
o Ork: ‘Ard boy or Weird boy
o Eldar: Farseer
* Hero classes will begin at higher level…
* Likely 40.

A player progressing as a marine will do so as follows:

Grey knight fits in fairly well at around 40.

* Tech priest are very, very pure adeptus mechamicus themed…Backpacks with a robot arm.
* A cover system is implemented.Waist high cover and standing cover.
* Cross platform is very possible.
* Shooting mechanics will have aim assist
* Similarly, melee attacks will lock on.
* Abilities work similar to Warhammer Online. A common resource, then each class has a unique resource used with abilities.
* Weapons inxrease in “coolness” as far as progression is concerned.
* A lv. 1 autogun may be it’s familiar form in necromunda and early IG… by lv 60, sone autoguns look cool enough for inquisitors to be using, lathered in fancy trim, aquilas, etc.
* Same goes for other weapons…. think Call of Duty, as you unlock the various weapon upgrades, you guns start looking cooler.

Each class has 3 specialties.

* Marine: Tactical, Devastator, Assault
* Assassin/guardsman: the major assassin type, callidus, vindicare, eversor (however you spell it)
* The Marine is by far the most flushed out.
* most abilities are still very WIP.
* Jump packs- not sure how they’ll work. 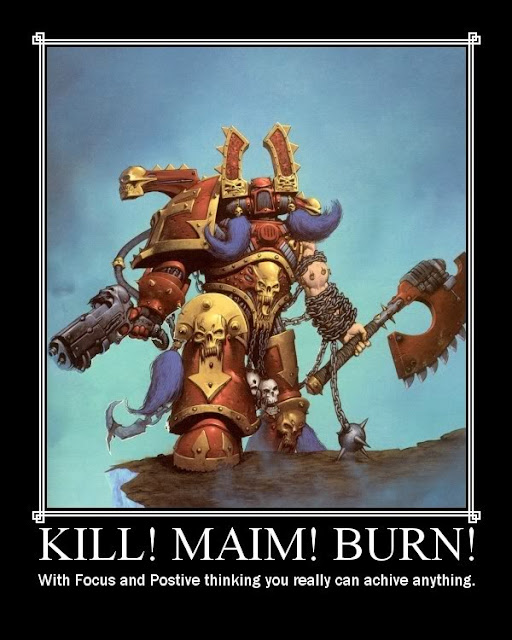 Found that poster at mydicehateme :)

Needless to say, I will be playing this and I will be taking KF there on the Destruction faction. Regardless of anything we will be trying this game out. In 2013....
Posted by Bootae at 23:14