It seems a lot of people didn’t notice this, but a hot fix a few days ago brought in reductions to the population caps in Fortresses. When this was discussed on my guild’s voice comms, the topic was met with groans of frustration and people were quick to voice their irritation at the whole thing. Generally we’re a pretty positive bunch, but in this case negativity was hardly surprising.

I’ve posted before about the problems with Forts and what could be done to improve them, but with this latest change and other recent issues with forts, it’s time to talk about them again.

The population caps were first introduced to stop the zones crashing. Prior to this going live, a reliable (but lame) defensive tactic was to flood the fortress with players of any level and crash the zone. Of course even without purposefully trying to achieve this, zone crashes were extremely probable on almost every fortress attack. The introduction of the level limit (37+) and the population caps (limiting how many players could get into a fort zone) dramatically reduced the frequency of zone crashes, though it didn’t eradicate them by any means. Thankfully the 10-second delay lagfest of the past was gone, but busy fortress attacks remained far from lag free and their playability was debateable. As such whilst things got better, they still hadn’t actually become good enough. Unfortunately the population cap also introduced us to some new problems, problems that this latest hot fix is likely to make worse.

When trying to lock a zone prior to a Fortress, lots of people will camp on the very edge of the zone so that they can be sure of claiming one of the limited spaces before the cap is reached. Likewise some people on the defending side will not bother trying to stop the zone lock and will just camp inside the Fort, which of course stops other players on the defensive side getting in. You could of course argue that both are valid strategies if you want to launch a quick attack or a solid defence. Alas, with conqueror crests, loot and renown up for grabs, it’s an argument that in some cases isn’t always convincing. Then of course there’s the argument that you want your best guilds/alliance in the defence/attack, but however correct that might be it just leads to accusations of elitism and forum shit-storms. Plus there’s no guarantee it won’t be them getting shut out anyway. End result is always a truckload of people being left out with little to do for a while.

The other big problem is it’s delivered a steaming box of apathy, something that I myself have suffered from. Why bother going to a fortress? We probably won’t all get in and our warband will get split up. Which if you’re a guild that likes to play together, well, that buggers things up good and proper. If you do get inside what do you get? A laggy, dull experience that is nothing more than a keep with a bigger wall. Ok so what about the loot? With the game having been out 10 months or so it seems most of us have at the very least full Sentinel, so Conqueror is just a novelty for a lot of people. And that lot of geared up people are often the ones you want in the fight...
Yea gawds you negative git Bootae! What about the renown?!?!
I can get more renown from 1 scenario in 15mins. Or a whopping 2 scenarios if they’re bad ones. Check out this screenshot from a friends scenario: 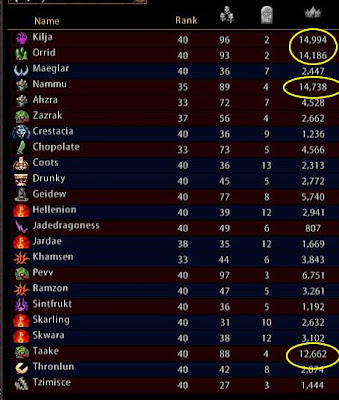 Ok that’s an extreme example and I’ve not seen renown that high before, but I regularly see 3-6k, for a mere 15 minutes work. Add that and the previous together and we see that fighting in a Fortress is a bloody uneconomical way of progressing with your character.

Of course if you don’t take Forts you don’t get to siege Cities, but it’s an issue of motivation there. Do you want to spend up to an hour not having fun in a fort with the only carrot being that IF you win, you’ve now got to go through the whole crap again (and the zone locks before hand) and still could fail at the end of that? I sure as hell don’t. I think like most people, I don’t mind losing in a game as long as the game itself is enjoyable.

So what has lowering the population cap done? Well, it HAS made fortresses more playable. I’m now running with full spell effects on and for once it’s actually just about playable, but (as I’ve already seen today) people just aren’t bothered. Yes it will run better but we’re now less likely to get in, the rewards are mediocre and it’s still AoE hell, so why not just let someone else go through the tedium? And what about when Land of the Dead arrives, will anyone attack a defended fort again?

Attacking a fortress is just a waste of time.


Update: I've been on 2 fort takes today where the attackers were outnumbered by the defenders, despite there being plenty of Destruction around. People just aren't interested in Forts.
The last attack was a total classic. We were hitting the inner door when one of our guys on comms says something like "uhm, look behind us, everyone is running away". I turn and... yup, after basically just looking at the door everyone simply left. It wasn't even a wipe, people just couldn't be arsed with it. I don't blame them either.
Posted by Bootae at 19:37