A while back I posted about how Land of the Dead does not replace the main campaign. In that post I put up an image of the Thunder Mountain zone to show how little of the map is actually available for RvR. Earlier today while I was gazing up at the big mountain in that zone I realised my map was inaccurate and a guildie reminded me of this image from my blog. So I present the updated version: 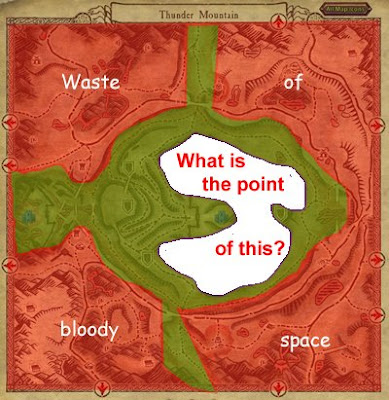 Other than looking pretty in a blurry ash covered kinda of way, what is the point of it? We can't go up there at all and it just puts further emphasis on the limited movement options in Thunder Mountain. It's just a GIANT waste of space in the middle of the zone.

Wouldn't it be better if we could fight up the mountain itself? Chuck an objective of some potent form up there and have us scrapping up winding paths to reach the summit. Then we could battle around the rim of the volcano, with extra tension added by the fiery pool of lava death below...

Or is there a good reason to keep massive chunks of terrain you can't enter?

How many other zones suffer from this?
Posted by Bootae at 00:13