Whilst chatting on guild vent the other night I asked the question “What do you think will be added first, the missing cities or Skaven as a playable race?”

The general consensus was new playable races first. Not what I expected, but perhaps they have a point. Their reasoning for this was roughly as follows… Essentially the campaign works as it is. There’s lots of fighting and Land of the Dead is only going to add to that. Sure oRvR has a load of issues and bringing the cities back could address some of those, but would it entice lots of new players to the game? Perhaps it would, but certainly not as much as the introduction of new playable races.

So I had to ask myself, what would I rather have, the missing cities or whole new zones and sneaky bastard Skaven to log in with? 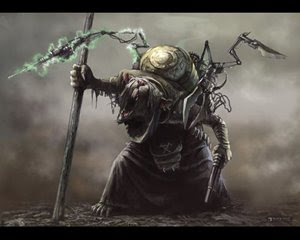 If you don’t know your Warhammer lore, then you maybe wondering what’s so special about them or even asking WTF are Skaven anyway?

Skaven are a race of chaos-warped rats that live hidden from the rest of civilisation, planning the downfall of everything and everyone. They have the appearance of a classic anthropomorphic fantasy creature; imagine a pre-menstrual rage filled Beatrix Potter drawing Ratty and you’re on the right track.

They are conniving, evil, untrustworthy, self-centred and utterly malicious. They have no redeeming features of any form. And there are millions of them. They’re under your character’s pixelated feet right now, scrubbing about, preparing your doom. Seriously folks, it’s not ceiling cat watching your vinegar stokes that you should worry about…

If it weren’t for their constant backstabbing and self-destructive nature, they would have killed or enslaved the entire world long ago. Thankfully it’s unlikely they will ever act in a truly united manner, but if they did then everyone is buggered. By rats… Not a nice thought that.

Not only are they full of horrid character, but they have a wealth of options for playable classes. There’s no need to create any dubious lore stretching class like the Disciple of Khaine. It’s all there just waiting to be used. How soon we’ll actually see playable Skaven I have no idea, but I’m 100% sure at some point we will. For now just watch your backs…