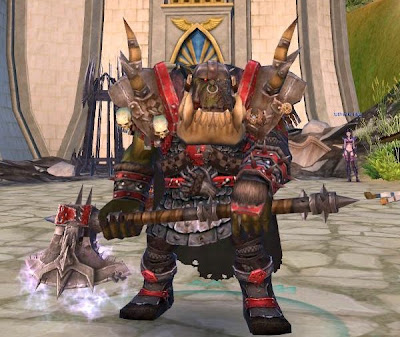 Cor blimey guv! It didn't take long to get Gashface a full set of Conqueror's War Brudda's Kit. Sure there's already other choppas with Invader, but then I don't play quite as much as those nut jobs ;) Plus I'm still using Bootae and splitting time between characters, so this was pretty damn quick really. Admittedly I've been a right jammy git with rolls, but it has to be said, the new token system was a huge help and I would be forced into BB/BE otherwise.

I got the chest, shoulders and belt with tokens, the helm from guild keep claim capture loot and both the gloves and boots dropped from players. Result :)