Bootae goes on a Spandex Frenzy

I wasn’t expecting to like Champions, I really wasn’t. Early beta feedback from friends had been extremely poor and in the past I played City of Heroes/ Villains, which I really wanted to like, but unfortunately the games just were not good enough. Whilst the CoH/V game world looked cool and the character creation was the best by far, it lacked longevity. I found the game to be a shallow, PvE grind fest with limited character customisation (apart from visually of course), and very repetitive questing and instances. With both versions of the game I got into the mid levels and then finding myself bored, I quit. As such it was a huge surprise for me to find myself enjoying Champions Online. 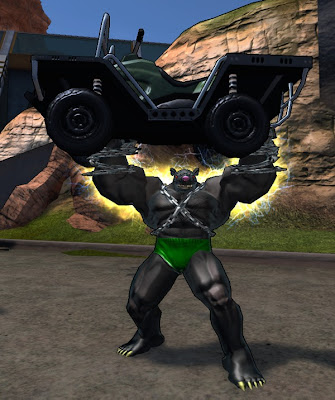 So what’s changed with Champions Online? Not a lot actually, but it’s seems better made and feels more casual play friendly. Make no bones about it; this is City of Heroes 2, but there are quite a few points that make this a more enjoyable experience, at least if playing from a casual perspective.

You get your Travel power after completing the starter/tutorial zone, which will be at around level 6. This is a lot earlier than in CoH/V, which is good, but the huge difference is that this time your travel power is actually decent from the moment you get it. In CoH/V until you powered it up at much higher levels, you flew/jumped/etc at the speed of a crippled sloth, which completely ruined the feeling of being super powered. Being Superman is cool, being his lame twin, not so much… When I first activated my jet boots in Champions Online, seeing them roar into life and get faster as I flew upwards was one of those “cooooool” moments. They have also animated the characters movement rather well, which I discovered as soon as I twisted myself around in mid air. Since then I’ve tried out a range of travel powers (there are a lot to choose from) and so far they have all been a lot of fun. How you travel in MMOs is one of the least talked about, but most important things for a developer to get right. After all you are going to spend an awful amount of time just going from A to B. Cryptic have absolutely nailed it and I would log in just to leap or fly about. Oh and super jump and swinging are FULL of win. 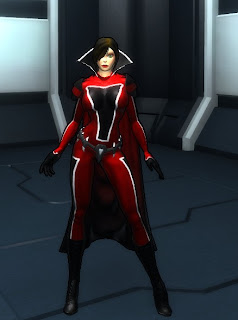 Character development works well. When you first create your character you can choose from preset starting powers, or pick and choose any combination you like. You can make anything from a sword-wielding lunatic that shoots fireballs out of its face, to a telepathic Shark-man with guns. As you level up you then find you’re almost totally free to choose anything from the wide range of power sets available, this gives you a HUGE amount of options. You only get to pick whole new powers every few levels, but with each ding you still get to choose other methods of progression. These range from major stat increases, to enhancements for your powers. These enhancements (called advantages) improve or add new abilities to your existing powers, for example giving a life drain power a group heal effect or removing cooldowns, that sort of thing. Advantages can dramatically improve the impact a power makes. There’s also equipment to be worn, which drops from bosses or as mission rewards. It doesn’t display on your character (with a few exceptions), which you wouldn’t want it to anyway, instead it just provides stat increases and in some cases extra abilities. In the very early levels all power sets feel a bit samey, but this changes as soon as you start picking up more powers (level 6ish, straight after the tutorial).

A brief mention of the much lauded character creation system. Like CoH/V before it, Cryptic have once again delivered the best, most flexible and diverse character creator ever. It’s bloody awesome. Some of the things people have created are incredible. There’s no need to look like anybody else, for once in an MMO you actually can be unique. I’ve made loads of different characters, from a giant Rat Ogre covered in chains, to an Ironman style robot, and then across to a super sexy spandex costumed hero with gravity defying boobs. It really is great stuff and the best thing is I’ve not yet seen anyone that looked anything like my characters. 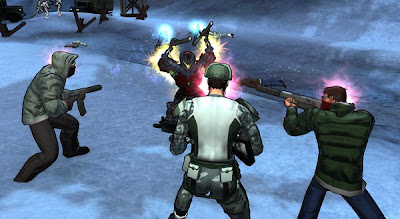 Combat is very straight forward, but fun. I’m not convinced there’s much skill in it, but frankly I don’t care, it’s easy to get into and the powers have a great feeling of oomph! If you hit someone with powered up force/fire/lightning/fists/etc, it makes a satisfying THWAP! Champions features the most fun knockbacks ever…

The main difference with the game’s combat system is that whilst it has the normal powers consuming energy lark, this time you get energy charged up by attacking enemies with an energy builder ability. These energy builders normally take the form of very fast firing attacks. I have to say I wasn’t convinced by the energy builder system at first, but once you get the hang of timing it, it actually works very well.

As for the mobs you’re fighting, shock horror, they’re the usual MMO fare. Shortsighted, deaf and stupid… where do they get these villains? Brain taxing it’s not.

I thought PvP in CoH/V sucked royally so this couldn’t get worse and from what I’ve seen so far it hasn’t, but it’s not even close to dripping with uberness either. PvP so far has just been cage fighting. Compared with WAR it’s laughable, but it’s not trying to be meaningful, it’s just something to fool about in. Seriously, don’t expect much from it and it you may find it mildly amusing now and then. If you want some amusement, read the official forums and see the whining about power set balance. LOL! As if it matters in this game :P If you’re playing CO for serious PvP, then tbh you probably need your head examined. 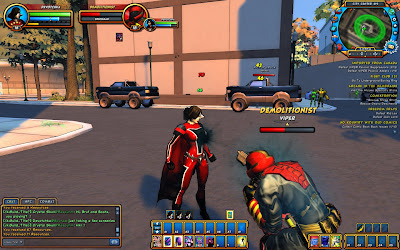 The user interface is pretty solid. It’s clean, looks nice and has some good features, but it’s not without minor irritations either. That said, they really are nothing huge and are probably not worth mentioning. I think I’d be nitpicking for the sake of it. Particularly as for once I don’t feel any need to mod my UI at all.

What I must mention is the way the friend system works. When you create your account, as well as setting up your log in info, you also choose an account name. When you add someone to your friend list you add their account name, which then shows whatever character they’re logged in with. Saves some faffing about for sure and makes it a lot easier to ignore any abusive twats you may meet. Not that I have met any yet, the community seems quite chilled out so far. Lots of roleplayers… which can be fun for all kinds of reasons :P 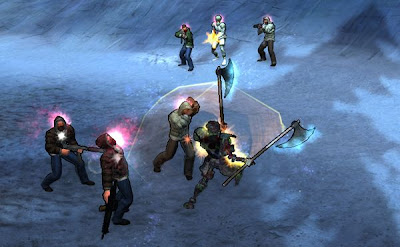 Graphics... You will love them or hate them. Cell shading is not everyone’s cup of tea, though I’m told you can change the settings quite a lot and make it look more traditional. I’ve not tried changing it much myself; so don’t take that as gospel. I like the look of the game myself, visuals are very smooth and it does feel like being in a comic book. It also runs extremely well on my PC with fairly high graphic settings (for reference my basic spec is: Quad Core Intel 6600, 4gb RAM and a GTX260 gfx card, so nothing special). Barely any lag and high frames per second, regardless of how many unique looking characters are next to me firing off big spell effects… A lesson for a certain other game perhaps…

XP loss on death is gone. In most MMOs I denounce the lack of consequence, but this game is, in my mind anyway, a much more casual MMO. Being able to play very casually and not having to worry about something going wrong, means exploring is much more forgiving and also makes levelling an entirely more relaxing experience.

Which is what I see this game as. A relaxing experience to mess about with. It’s not a serious full time MMO, it’s still just a load of PvE grinding and basic instancing, but it works really well as a secondary game. I’m much more likely to keep this active playing it on the side, than I would be if it was my only or full time MMO. And this is the key to me liking Champions Online. Accepting that this is not a game to compete with your subscription to WoW, WAR, Aion or whatever floats your boat, will make a huge difference to how much pleasure you get from Champions.

Now then, now then! I need to temper my enthusiasm with a major concern. I’ve not seen the end game content yet and won’t do for a long time, however there is one thing already very noticeable and a puzzling dev decision. There are bugger all different zones in the game. That does not bode well for longevity at all and I suspect there is real risk of people getting bored before they get to level 40. The zones are pretty good and quite large, with more variety in their theme as you get further into them, but at times they’re a little lacking in atmosphere and on occassion feel like the collection of spawn points that they are. Millenium City is probably the best I’ve seen, particularly when you’re down at street level. Flying above it makes the buildings look a bit boxy, but once you’re in the streets throwing lamp posts at people, it gets a lot more involving. I don’t think it really compares with the atmospheric impact of zones from other games; places like Praag, Salisbury Plains, Zangamarsh, Feralas, Connaught Valley, etc. Those are zones with real character; where as Champions Online’s Canada and the Desert often feel rather sterile in comparison. That said, there are golden moments to be found. Leaping to mind is the Westworld influenced robot cowboy town in the desert, which was a real classic.

In fairness, I’m only in the mid levels. The game could have as of yet unseen depths and perhaps I’m doing it a disservice calling it’s instancing basic. I won’t know for a good while. What I do know is regardless of that; I can play this in short bursts, care free and have fun. That is no bad thing.

For a mere £17.99 from play.com I would say Champions Online is well worth trying out. If you measure the cost against playtime, then you’ll get your moneys worth just making and messing about with characters. Is the game worth subscribing to long term? I honestly don’t know. For me in the short-term yes it is, but beyond that? Hmm. Impossible to say. But I’m not worrying about that, because right now if WAR is quiet or I need a change of pace, then I can log on to CO, leap buildings in a single bound, throw forklift trucks at baddies and swing through the streets like spiderman… with a machine gun and bunny ears.

Plus I have to say; there is one huge selling point. I’ve got a super sexy vixen of a super hero that shoots lasers from her boobs. Now that is classy…
Posted by Bootae at 15:47