Dan Stahl, Cryptic's Executive Producer for Star Trek Online, has posted up the latest Ask Cryptic article where he replies to a range of player submitted questions. Despite there being a lot of the "promising but non-committal" answers that game developers tend to give, it is well worth a read and gives a bit of insight into future plans. Certainly Dan is promising a focus on adding new content, but the quotes I'm most interested in are these:

Q: (WazzaG) When will we see a Romulan Faction? I always read answers along the lines of “when the KDF has more content.” When will they have enough content so you can then launch a Romulan faction?
Dstahl: This is the number one long-term question on my mind and something I’m working directly with Jack (Cryptic’s CEO) and Perfect World to address. While I can’t give you a date, one of my goals in returning to Star Trek Online is to address this very issue.

Q: (KeithCrimson) When do we get to play as a Cardassian?
Dstahl: We’ve been holding off on having playable Cardassians and Romulans for the time being as we envision having a complete faction devoted to these races. That is the only reason we haven’t added them as playable species in the game yet. They are reserved for future expansions. That said, depending on what our timeline is for future expansions, we haven’t ruled out the possibility of having a few Cardassians or Romulans appear in Fed/Kdf ranks. So this is very TBD still.

OK so clearly it's not going to happen anytime soon, but it does sound like it will happen. Particularly the Romulans if that's the number one thing on their minds right now. Now, bare in mind STO is not a RvR game and as such a third faction would not turn it into DAoC in space, but aside from the obvious PvE additions and masses of new content, it would open up more PvP options. Plus it would sure make a lot of people very happy and be one hell of a news headline for the game. New factions are big media hype news, Romulan ships look cool, things that look cool and have media hype will attract players. And that's without considering the attraction for Trekkies. 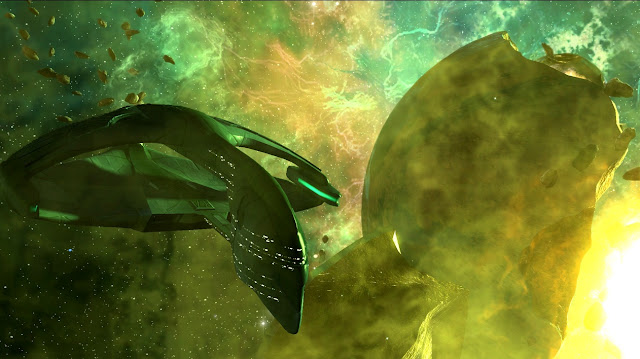 STO has exploded in popularity since it went F2P, on a couple of occasions I've even had to queue to log in (not for long thankfully) and from what I see in game it looks like their cash shop is very successful. Everything in the cash shop can be earned without paying real money, since you can convert in-game currency "dilithium" into Cryptic Points to spend in the store, but that takes time to earn and it's pretty clear people are putting money in to get stuff quickly. Which is all good for STO and only increases the likelihood of Cryptic being able to introduce major expansions.

This is purely a personal opinion, but I suspect we will see an announcement of a playable Romulan expansion for STO being made around the Summer of 2012. Followed by a series of episodes related to it over the following months, then see it going into beta on tribble in December and going live Jan/Feb 2013. He says, speculating hopelessly :P
Posted by Bootae at 13:38