I’m guessing that by now you might have heard the news… Mythic were given the backing to create a whole new 6v6v6 F2P Warhammer game derived from and related to WAR, but one that is actually a separate entity.

Warhammer Online: Wrath of Heroes, or as Mythic are shortening the name to: WAR:P4F. Though I think it will quickly be known as WoH… Or maybe WARWOH, or WOWOH.. lol I don’t know :P

The game takes the format of 6v6v6 scenario style combat where players take control of predefined hero style characters from the Warhammer universe and kick the crap out of each other. These characters have 5 abilities each and do not progress like in WAR or other traditional MMORPGS (though I believe there are others forms of advancement for players) this has allowed Mythic to get the game balanced a lot easier and is reminiscent of the other F2P game in that respect, League of Legends for example. Mythic at present have around 30 different characters with some types familiar to WAR players, but a whole load of others including things like Vampires, Trolls and much more. These are not generic classes, but specific special character style named heroes with different abilities and themes. 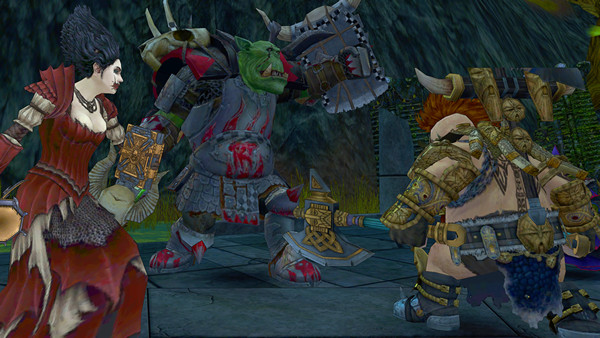 I was told at the blogger event that subscribers to WAR will get some kind of rewards each month for the new Wrath of Heroes game, so a WAR sub will actually effect both games. Presumably there is also hope that people who play the F2P game might choose to subscribe to WAR to get those benefits. It seems then that Mythic have a chance here to create a symbiotic relationship between the two games, with revenue and development from Wrath of Heroes potentially aiding WAR and ensuring its future. It is also (again) potentially a massive source of new players for WAR. F2P games are unbelievably huge these days and with the Warhammer IP, this new game could draw in monstrous amounts of players. If only a tiny percentage of them start subscribing and/or using the cash shop, then it should have a dramatic impact on WAR’s population and finances. It’s a very interesting concept as unlike other F2P games, subscribing to WAR will give you benefits in the new F2P game as well as access to a separate, full on MMORPG, which I don’t think anyone else has done before. That could be quite an appealing concept to players looking for a new game. And more than anything that’s what WAR needs, players and money, so it’s worth a shot.

So as you can see, when I said Mythic had something significant coming, I wasn’t joking. However, I also said I was not that excited and I’m still not. This new game was not something I had even considered, it’s not something I had ever thought about wanting and of course I would rather have masses of new things to do in WAR itself. Yet the reality of the situation is WAR needs new players and more money if it is to have a chance of adding the things that myself and others want to see. If Warhammer Online: Wrath of Heroes is a success then in theory WAR will get those things, so I can understand why Mythic have come up with this idea, it is potentially a massive result for them, but potential has to be realised and so far WAR has not done so well on that front... WAR players will want to quickly see assurances (by actions) that their game has not been sidelined.

I did of course raise that with Mythic when first shown the new game. Interestingly it was explained to me at the time that this was already starting to happen, as things designed for Wrath of Heroes can be ported straight into WAR. For example the development for the 30+ heroes has meant they now have models, animations and spell effects available for a wide range of new things. These can potentially be used in WAR for all sorts of stuff… New armour sets are already confirmed. But really it’s far too soon and we shouldn’t get ahead of ourselves and hype something based on speculation. At least we can finally be a bit hopeful as they now have assets available that they didn’t before and a genuine chance to gain more, which is surely no bad thing. 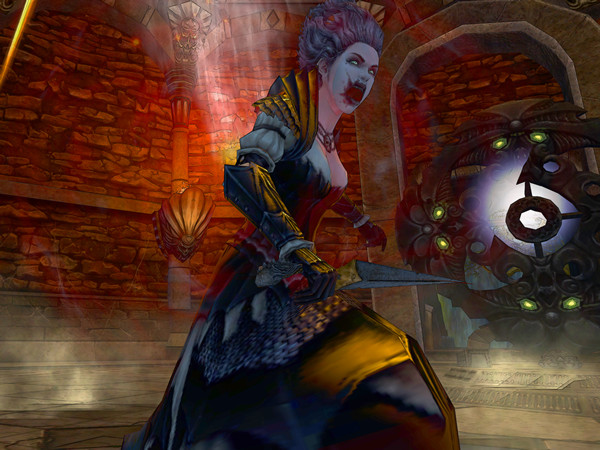 Will people drop WAR and just play the new F2P game? Possibly, but not if they like RvR and openworld combat, Wrath of Heroes is NOT a replacement for WAR. Mind you, it might take away those that are primarily scenario players. Will people rage and declare it a terrible idea? Definitely, but at the same time some will think it a brilliant way of increasing income without making WAR into a pay to win game. Only time will tell who is right.

Do I think it will work? I honestly don’t know. I hope so; I don’t see a clear reason why it would not, it is supposedly a fun game to play. What I do know, as I keep saying, is that WAR needs money and it needs a way to attract new players. This is a chance for both of those to finally happen. Anyways, I shall cut short my rambling as after the event where myself and other bloggers were first shown Wrath of Heroes, I sent in a few questions to Mythic to clarify things. Which I can now share with you:

Q) Am I right in thinking that it’s always a 3 way fight?
A) You got it, every game is a fight between 3 teams.

Q) Can you do premade groups?
A) Absolutely, games are always more fun with friends!

Q) Does it have guilds and if so do our WAR guilds appear or be linked to those in the new game? That would be very cool…
A) Our extended social plans are still in development, but long term some form of guild/clan system isn’t out of the question. Honestly it’s unlikely that we’ll link guilds between WAR and WAR:P4F, they have very different requirements. However we are looking at other ways we can thank the WAR community.

Q) Are there any limitations on which characters can be on the same side, as per Warhammer’s racial stuff? I can totally understand if it’s not in a more light-hearted game like this of course, but people will want to know.
A) No restrictions at all! Games Workshop have been working closely with us on the project though so fear not for the fluff. The approach we’re taking is that of hobbyists playing side games with their minis. After all, why shouldn’t you organise a fight between the figures you worked so hard to collect? So all of WAR and Warhammer’s rich background is entirely untouched; WAR:P4F is all about having fun with some awesome looking Champions!

Q) I remember hearing that WAR subscribers will get in-game cash each month for it, but will it work in reverse so that people subscribing via the new game will get access to WAR, providing a population boost?
A) We’re still formulating exactly how the two games will interact, particularly as there is no subscription for WAR:P4F. Whether we offer in-game currency, items or whatever we’re always considering the impact on the WAR community.

Q) So am I right in thinking that you’re seeing this and WAR as a sort of combined product? With a relationship between the two where they promote growth in and help fund each other?
A) At Mythic there’s a lot of respect and appreciation for our live products. That’s ultimately part of why we’re making WAR:P4F in the first place. We want to continue development on the WAR game we all love without making changes that, while they’d make it more accessible to a wider audience, would damage the experience our community are dedicated to.

Q) What kinds of things are available for purchase with the in-game currency/cash shop/thing?
A) Tactical and cosmetic options, including Champions and alternate visuals, as well as accelerators if you just want to save some time. However we’re being very careful about not selling “power” that can’t also be earned, just more options for your toolbox.

Q) 30 characters were mentioned, but roughly how many are expected to launch with and is access to these limited in any way relation to subscription/paid for unlocks?
A) At the time of the blogger event we had just over 30 Champions. The number that we launch with will be considerably smaller than though as we want feedback from the WAR:P4F community to help set the direction from there. At any one time a few Champions will be available for use by everyone, with the other available Champions only usable if you’ve unlocked them.

Q) I heard something about advancement or progression in the new game, is that linked to the characters or the player?
A) All progression is associated with your meta-character (aka. You) as you’ll be switching Champions a fair bit while playing a single game.

Q) When is the beta testing likely to start?
A) As soon as we’re ready, which won’t be long after our official announcement. We want to get peoples’ hands on the game as soon as possible, we’re as eager to show it as you are to see it. Of course we still need to make sure we get all the balance and stress testing done too, but rest assured that it is coming.

Q) Is there any kind of ETA on when it would go live?
A) After the beta ends ;)
Kidding aside, we want to make sure we have a solid beta phase first, and that will dictate a lot about the final launch.

Q) What sort of plans are there for advertising? I know that's quite a big question, but it's quite a sensitive topic regarding WAR at the moment and the answer could go a long way towards promoting positivity within the WAR population.
A) If you wondering about TV ads or 50 foot billboards, those aren’t going to happen. There are plans, there are budgets, and there is a reality about hype. We want people playing WAR:P4F, and we want them playing soon, but we also want to control the flood as much as possible so we can gather real, usable feedback.


Oh and here's the producer's letter to help ease any concerns about WAR
Posted by Bootae at 15:47