The idea of a true Warhammer 40,000 MMO is one of those dream games. Travelling the galaxy as Rogue Trader exploring, fighting, trading, just trying to survive… Or perhaps as servants of the Inquisition, scouring the galaxy of heretics, xenos and worse. Or scrubbing about as a Hive Ganger, trying to score big and get out of the damned lower hive. Whatever the details, we’d be paving our own way in the brutal, uncompromising and vast 40k universe. How glorious it would be! 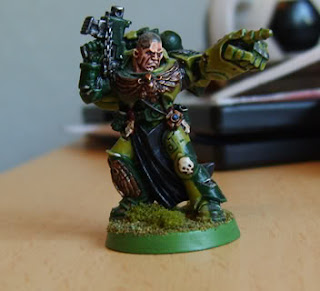 Shame it’s never going to bloody happen. Too many people would want to be sodding space marines or tree hugging pointy-eared space gits. Before you know it, the game would get all superhuman and any real chance of character development is stifled. When the 40k MMO currently in development arrives it’ll be something shooty, where we get to play the uber warriors of different races and don’t have to think too much. Probably something, more like Planetside, which in many ways is no bad thing, but it’s a shame we’ll never get to experience the real 40k “universe”. Within the lore itself Spacemarines, Eldar Aspect Warriors, Necrons and so on are meant to be very rare; the vast majority of imperial citizens would never see them. Obviously they’re all very appealing, full of character, awesome imagery and pew pew lasers, but they lack freedom.

A spacemarine is a spacemarine, is a spacemarine. He has a bolt gun and a knife. Some of them have other guns, but not many of them and at the end of the day it’s all very prescriptive. He doesn’t go where he likes, he has no social life or freedom, he follows orders and that’s it. Aspect Warriors? Just like spacemarines really. They train and they fight as ordered by their Farseers, nothing else. Necrons? They… uhm… stand still for millennia, wake up, shoot things, stand still for millennia, wake up, shoot things…. These characters are fine for a shooty game, but they are no good for an mmoRPG. Players of WAR with it's Warhammer Fantasy setting will know that it also has a selection of dedicated warrior types, but their lifestyles are not as restricted as those in 40k. To allow the RPG element of our characters to flourish we need to have lifestyle choices and WAR gives the RPer in us (no matter how small) at least a chance of player freedom, it wouldn't be so easy with 40k.  Not without butchering the lore and then it stops being Warhammer.

However would enough people be interested in a 40k game where we played character types with more control over their destiny? Bounty hunters, Inquisitors, savants, Arbrites, ex-Imperial Guard veterans, Rogue Traders, hive scum, etc, etc. Would people want to play a 40k MMORPG themed around those type of characters? Or would they just complain about the lack of spacemarines? Sure, I would love to run around blowing up alien scum with a bolt gun, but I’d also like something immersive, something with that sandbox MMO depth and feeling.

I’ve often pondered on a Necromunda themed MMORPG. The hive gangs and noble houses in the upper spires could make perfect player clans, there’s a monstrous range of character class options and the hive city has incredible potential for PvE and PvP. It really could make a unique and compelling sand box game. However the one I’d really love to play would be themed around the Inquisition. A galaxy spanning with different playable factions, something like the Inquisition and various chaos xenos cults. Fighting a secret war across the Imperium, heh I guess it would be the ultimate cops and robbers MMO. But it’s just that lack of damn spacemarines… both ideas are probably too niche for a developer to even consider taking a punt on.

I'm sure I'll like the 40k MMO when it arrives. It's Warhammer and I'm a sucker for that gothic goodness, but I think I'll always have that nagging feeling, it could be so much more. This is the curse of Warhammer, be it 40k or Fantasy.
Posted by Bootae at 17:47