Dispersing the zerg with... a Fortress???

OK so yesterday I posted about Mythic basically confirming the ORvR lakes will stay small, which while disappointing (for me anyway) is not all bad news because at the same time Mythic also confirmed that they are going to be doing something to disperse the zerg:
“We have a lot of plans for the future and dispersing the zerg, in a mindful way, is high on my priority list”

Now regardless of if you sign up to any of my previous posts on how this could be done, I think most people would agree that it should be done. Zergs breed lag, emphasize the over dominance of AoE, seriously punish outnumbered realms and generally spoil the game. So what other solutions could Mythic have in mind? Pondering on this got me thinking about something that may hold the answer and is also something we do know is coming; the return of Fortresses.

At present the campaign’s only purpose is to lock zones with the ultimate aim of laying siege to the enemy city. So everyone is zerging the zone closest to lock with no real need to go elsewhere, other than the occasional quick zerg and back if somewhere else gets close to locking. However, if the Fortresses did return, but with Dark Age of Camelot style relic raids, this could provide a set of alternative goals for the campaign. 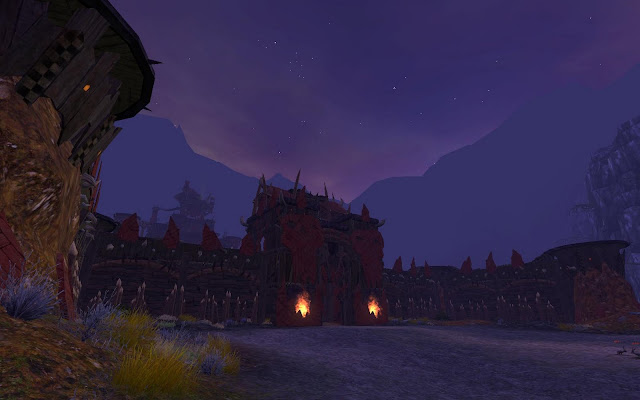 I know I've posted about relic raids before, but just in case you’re not familiar with them, this is how they work. Each Fortress has a “relic” inside and each relic provides a realm wide buff for the owners of that fortress. Fortresses cannot be captured like keeps, they are always under control of their original realm, but they can be raided and the relic captured... If you manage to successfully raid a Fortress and capture the relic, you then have to escort it all the way back to your fortress and place it there. This then means you get that relic’s realm wide buff in addition to buffs from any other relics you control. It’s pretty much a game of capture the flag, albeit on a monumental scale.

Getting a screenshot of this zerg cost me a "solo WAAAAGH into them looking like an idiot" death.
So if WAR had this, with relics being captured and escorted between the 2 fortresses in each pairing, then each relic would provide an alternative target. If Order are zerging and pushing the campaign in the Elf pairing, what happens if Destruction start pushing for relics in both of the other pairings? If the relic buffs were enough that they can’t be ignored, perhaps this would break things up a bit.

Obviously there are a lot of details that would need to be sorted out and I’ve no idea if this is anything like what Mythic have planned, but it might just work…
Posted by Bootae at 19:24