What to do with 2 weeks of double influence, renown and XP?

That was the question inadvertently put to every player on the EU servers recently, myself included. At the beginning of the 2 weeks I was all set on doing the sensible thing; getting my Chosen main (who was at RR68) as close to 80 as possible. Within just a few days I was up to RR72 and the renown was still flying up, but then with a resounding thud, I fell off the pixel painted wagon.
My name is Bootae and I’m addicted to alts.

That’s the reason why my Chosen was only renown rank 68 after 2 years of playing WAR. I’m just so easily distracted. It’s learning how other careers work, revelling in their different appearances, styles and themes. It’s being able to really understand other player’s career concerns and issues, finding out if the allegedly gimped is really gimped or just grass is greener syndrome. Plus it’s always a nice challenge seeing if I can be competitive with low renown alt versus all the 80s.

So over the last 2 weeks I got my Squig Herder to 40 and discovered what a fun class it is to play at 40, even in annihilator/devestator armour. One of WAR’s most atmospheric and entertaining careers to play for sure, I highly recommend. Having got the Squiggy to 40 and with my Black Orc building up rest XP, I figured I might as well finish my Witch Elf off. I levelled her to 33 a looooooong time ago, then for a reason I don’t remember I stopped playing her. She was then pretty much forgotten as I was distracted by the (at that point) newly released Choppa. With these 2 weeks of boosted XP I figured “what the hell” and levelled my Witch Elf from 33 to 40.

It was then that the unexpected happened. I discovered that I bloody love playing my Witch Elf. It’s awesome fun, not because of it being over powered, it’s actually pretty well balanced (versus other careers, though debatably underpowered versus its own mirror). The Witch Elf is fun because it is squishier than the squishiest squishy squish, hittier than the hittiest stick of hittydom and all wrapped up in a bundle of sneaky pie. The career really suits my play style too, since I do quite a lot of solo roaming. Not only is solo roaming fun and challenging generally, but it’s also a great way to learn a career. If you want to be able to consistently win 1v1s and stand a chance in 1v2+, the only way is to get out there and fight on your own, lots. Having said all that, on a bad day solo roaming can be very frustrating. You just have to learn to roll with the punches.


My little WE with one of KF's well known roamers Biggsie (For Norn people; yeah he's been grabbed by the green). 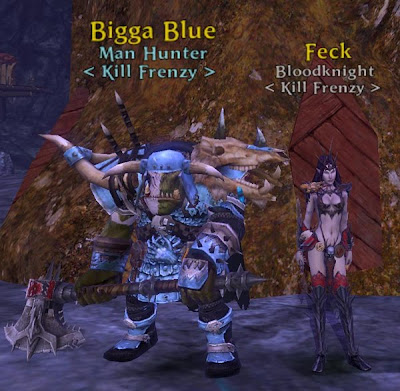 Anyway, I ended up playing my Witch Elf a lot, getting to the mid 40s in renown rank so far and my plans to hammer up Bootae’s renown rank some more failed. Not that I care to be honest, as I’ve been a bit worried about running out of carrots for my Chosen. I’ve only got one bit of Tyrant and two bits of sovereign left to get, at which point there’s little left to achieve. Other than grinding scenario weapons, but other than with the ladies, I’m not good at grinding. Easily distracted… So all in all the 2 weeks of boosted XP, etc worked out well for me. I now have a slightly bonkers 7 level 40 characters and a new Witch Elf obsession.

Of course I now have a new problem… I’m curious about levelling a Black Guard, but I’d have to delete either my DoK or Marauder. Doh.
Posted by Bootae at 19:49