What is Destruction's most fun career for a new player?

I wasn’t sure what to post about today, I left my list of potential topics at work and unfortunately I’m sat at home with my face on fire… don’t ask. Thankfully I’ve been saved by an email request from a chap by the name of Ulli, so Ulli thanks for the mail and this one’s for you sweetie.

Ulli is thinking about starting WAR and asked if I, as a self confessed alt whore, would post about what I think is the most fun Destruction career to play. That’s actually one hell of a tricky question to answer and is immensely influenced by personal taste, but none the less I shall attempt to answer.

First off I can’t claim to be an expert on every career and as the word fun was included, I think to make a judgement I have to have played them plenty at 40. So I will only consider the ones I personally have at level 40. Those being:

Which means I’m not thinking about:
Black Orc
Disciple of Khaine
Marauder
Sorcerer

Though it is worth mentioning, the Disciple of Khaine and Sorcerer are without any doubt the two most powerful careers on Destruction. So if fun for you means being a nigh unkillable healing machine of death or having nukes that make the Sun look a bit wet, those two might be your thing. How fun they are to play I can’t really say.

So what makes a class (or career as we call them in WAR) fun?

For me I think it’s these 4 things:
And this is where I hit a bit of a problem… I started scoring them to see what would win, but all of the careers that I play score highly in each area. Each has a very different playstyles and I enjoy playing ALL of them, but I don’t know which I like best. However there is one I think that is worth ruling out for a new player; The Magus. It’s almost great, but it trips over in a big way as it lacks direction, burst damage and utility compared with the Sorcerer. Unless you take the rift bot bomb route (rift is a spell that pulls enemy plays towards you, the bomb is you and your groups AOE attacks), which is a restrictive gamestyle, it’s a bit like Mythic don’t quite know what the Magus is there for. Not that it’s as bad as many make out, but really I think the other options are just plain better and certainly more forgiving for a new player.

Anyway, with the other careers different play styles and abilities balancing themselves out in the fun stakes, I think the best thing for any new player is to take advantage of the free trial. Make one of everything, level it up to 11 and get a feel for each career, it won’t give you the level 40 lowdown, but at least you’ll get a flavour for it.

Bah I can’t bottle it like this. I need to choose…ok ok… 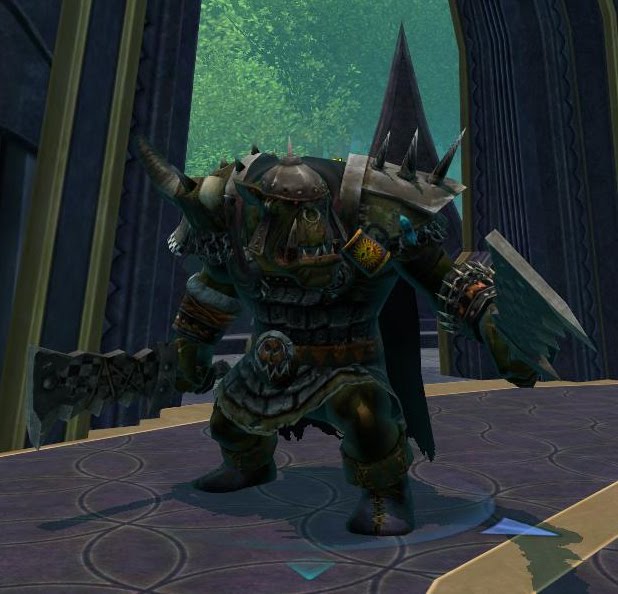 They look awesome, like totally brutal... Their rage system is simple, effective and well balanced, and they also have lots of abilities that are worth using, if played correctly this is no single ability spamming career. Choppa also have a very wide range of viable ways to spec their mastery points (talent lines, specs, whatever you want to call them), with each of the 3 mastery lines working perfectly well. You can AoE bomb with them, be a single target damage dealing monster, buff friends and debuff enemies. If you spec for it you can even self heal! They have a bit of everything, but with the ability through mastery points to be more than a jack of all trades. Also as a later addition to the game, it seems to me that Mythic had learnt a few lessons about itemisation when the Choppa was introduced, so gear wise you have a lot of options. There is nothing about the Choppa that I don’t like.

So there you have it. If like Ulli you’re considering starting WAR, but are unsure what to play and want something that will be good old fashioned fun, I would recommend the Choppa.