Sometimes Altdorf is just a plain bizarre. So there I was, having just cleared one Altdorf with a couple of KF groups, I got out with 7 mins to go and most of the guys were gonna head off elsewhere, but I figured I’d do one more and go in solo, see what manner of PUG I get. We get inside, take the first 2 objectives, get to Emperors Circle and Red Guard are there. It was a sloppy attack by us and no surprise, we all get butchered. Of course everyone starts leaving, but I was feeling stubborn (stupid?) and decided to stay and fight. It ended up with just me and 4 others left inside with each of us doing our own thing against a load more Order.

It was strangely entertaining… I tried a few times to ninja myself a kill but kept ending up fighting multiple Red Guard at once, which obviously wasn’t going to be easy. Still I think I at least gave them a bit of a fight, before supplying my renown. When it became apparent that I was on my tod all the time some of the guys were good sports and we larked about for a bit, emoting, jumping around, you know… the usual sociable nonsense when you can’t directly speak to each other (sometimes I think WAR needs more emotes). I thought for a moment I might even get some duels, but alas a few others were not quite so friendly and jumped in each time, but hey no complaints from me, if it’s red its dead and all that.


I dunno if the guys intended lining up for a screenie, but it worked out nicely for this post... 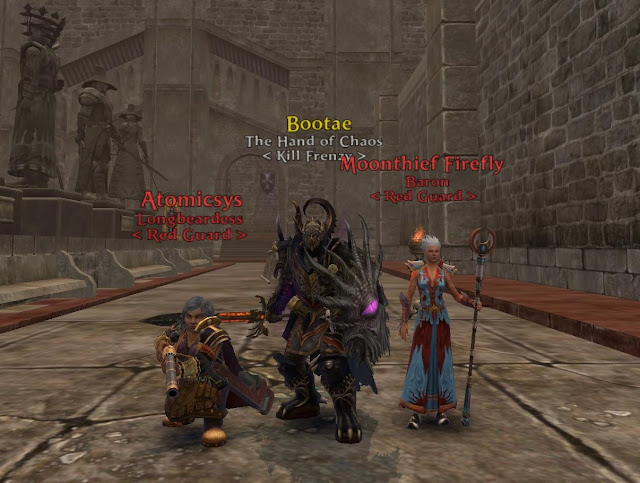 Anyways, /wave to everyone in there, it was odd, yet amusing.
Posted by Bootae at 20:32