Blorc update and a quick word (or several) on maintenace messages

OK so you may have noticed I haven’t posted about my Black Orc for a little while. You may have thought I’d given up, that the pony plan system had finally driven me to despair. But no! Thanks to some Land of the Dead power levelling on champ groups I hit level 31 the other day and am now in the heady heights of Tier 4. Which of course means I’ll be continuing to power level all the way to 40 and probably won’t be bothering with scenarios or RvR for a bit. Well, not much anyway.

I still loathe the plan system, it is truly terrible when compared with playing my Chosen in that respect, yet the class continues to ooze character despite this and I’ve not even considered quitting. I’m levelling with a Brawler spec, but have had to go sword and board for tanking the champs, I think I’ll be sticking with this spec tree and swinging a great weapon when I properly start tier 4 pvp.

On the armour front, I’ve taken quite a big step towards the end game look, with huge chunks of metal everywhere. Except for my feet, which are some random RvR vendor crap, I’m wearing full Explorer gear from Land of the Dead in this screenshot. Not exactly a proper armour set stat wise, but it’s not too bad for my level and has a decent look. 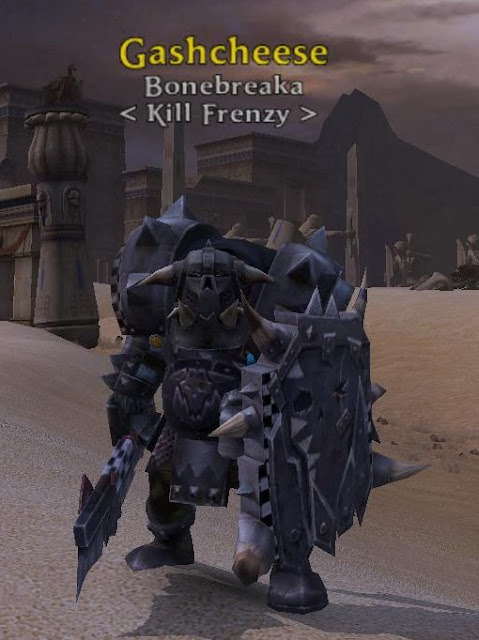 Sorry it’s quite a dark screenshot btw, I had to rush as the server was being taken down for maintenance out of the blue at 11pm on a Friday night. An emergency is an emergency, I just hope it really is and isn’t someone just not giving a toss… because that’s how it looks when no real reason is given for something like this.

A tip Mythic, instead of some apparently flippant message, if you say “emergency maintenance to resolve serious issue X Y and Z”, then you’ll find people much more receptive to these things. not that I mean to teach you to suck eggs or whatever ;)

As it was people were literally fuming mad in region chat and it’s certainly not a great impression for the large number of returning players we’ve got right (due to 2 weeks free).

Still 1 emergency downtime over the whole transfer, aint too shabby.
Posted by Bootae at 23:22