To trudge: the slow, weary, depressing yet determined walk of a man who has nothing left in life except the impulse to simply soldier on.

Its strange, I’ve been playing MMOs since 1997 and as I think back over the various games, I’m struggling to think of one where there wasn’t a section of levelling that felt too bloody slow. There’s nearly always a big chunk of levels where it just feels like your trudging through treacle. I’m not sure why developers always spray this gooey muck somewhere, perhaps it’s insanely difficult to get right. Which is unfortunate because it’s an issue that can easily ruin people’s perception of a game and become an unassailable barrier. Take my current two active MMOs: Warhammer Online and Star Trek Online… 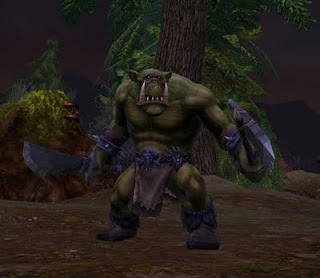 WAR’s journey to level 40 is split into milestones by its tiering system, progressing to a new tier brings major changes in your game experience and the locations you fight in. Tier 1 (level 1-11) and tier 2 (12-21) are perfectly paced, with just the right amount of time spent in each. I’ve put 6 characters fully through those tiers and it’s been a joy every time. However of those I’ve only got 4 to max level, leaving two lost souls in tier 3 and I have another 4 characters spread throughout tier 1 & 2. I’m not rushing to get those into tier 3 either, simply because it is WAR’s trudge in the treacle. It takes too long and is to be frank, boring. The fighting in the RvR lakes and scenarios is erratic and the PvE has worn thin at this point. Once you get out of tier 3 and into the final tier, life gets more interesting as you’re now playing with the big boys. The PvE remains meh, but I’ve never found tier 4 a hardship to reach level 40 in, mainly because I just do RvR. That and I guess psychologically I’m on the home straight with the end game in sight. Problem though is that many people didn’t make it through tier 3, as it burnt them out. They wrote WAR off as rubbish and took themselves to pastures new. Which is a shame because despite WAR's much whinged about problems, it does provide some great RvR fighting in tier 4 that you just can't find elsewhere. 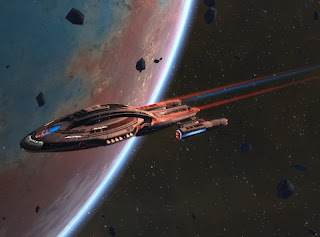 Star Trek Online’s pacing is a completely different kettle of fish, yet has the same problem in a different place. Like WAR it is split into tiers, in this case 5 of them which are defined by your character’s rank and ship class options. After completing the tutorial you’ll be at Lieutenant rank and have a light cruiser to fly and it then takes 11 grades (levels) to reach the first major promotion to Lieutenant Commander. This is the point where you get a choice of ship class: Cruiser, Escort or Science ship. It’s a huge milestone in the game, as this is the moment where you choose how you want to play space combat. In fact it’s a more important choice than when choosing your officer class during character creation. It’s also at this point that the game really takes off, with each new tier having progressively better storyline missions, epic space battles and a lot of fun. I’m up to Captain grade 6 so far (tier 4) and it’s been an utter joy since getting my first science ship. It’s PvE whoring for sure, but damn it’s good fun and I’ve not felt any grind at all. 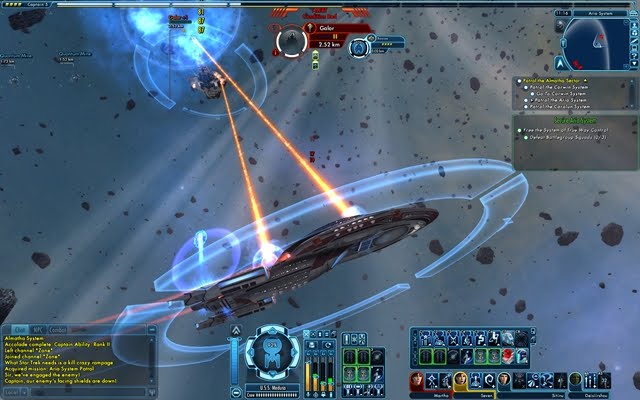 The problem is that it takes far, far too long to reach that first all-important Lieutenant Commander rank. I’ve seen a LOT of people at Lieutenant rank complaining that it takes too long to level in STO. If you combine that with the more basic missions in that first tier, you wouldn’t be surprised to see people write the game off at that point. Certainly it was this tier 1 trudge during beta that led to me expecting just another Cryptic game where I run out of steam before even reaching the mid levels. Whilst it turns out quite the opposite has happened and I will definitely be taking my character to max level, it could easily have gone the other way and that tier 1 trudge send me into rage quit mode.
Both STO and WAR are lucky in that they have their IP to fall back on. Many people will be a bit more forgiving about the treacle trudge when they have the sound of phasers melting faces or a witch elf’s buttocks to get mesmerised by (though WAR’s tier 3 really did push that forgiveness to the limit). Other games don’t have the luxury of good IP. The awful pacing of Aion in it’s early levels turned me off the game very quickly and as I had no interest in the dodgy fairy crap storyline, I was in and out quicker than those poor sods Pele pushes cock pills for. And yes I did just sneak an erectile disfunction gag into post about MMO gaming.


Even the “perfection” of World of Warcraft has suffered from this problem. How many people look back at sodding Desolace with a smile? Not bloody many I’d wager. I can’t think of any of my past MMOs where there wasn’t a long slog somewhere… Dark Age of Camelot, Asheron’s Call, Everquest, Anarchy Online, Age of Conan, etc, etc. They’ve all had it, for me at least anyway. Actually I’ve thought of one. Ultima Online… But then that wasn’t level based and to be honest the way we played MMOs then were different, so it doesn’t really count. 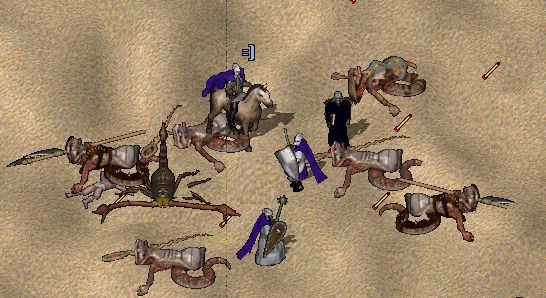 So what about you lot, is there an MMO you thought was perfectly paced or an absolutely tedious nightmare?
Posted by Bootae at 17:16