I’m going to be AFK for a week, which would have meant no posts, but thanks to the glory of iPhone I might be able to sneak in the odd post, but that may prove difficult… Still, worry not my bored at work friends! Just go check my blog roll for more WAR, MMO and other alt-tab work-time reading! ;) In the meantime I figured rather than post on a particular topic, I’d instead ramble about the various WAR related things ticking through my head and see where that takes me.

First of all we have the collision detection drama that I posted about yesterday. For good or ill, this will prove to be what 1.3.6 is remembered for. I saw this post on the WHA forums earlier which tickled me, it’s a quote from a Mythic grab-bag about friendly collision detection. LOL Poor Mythic, but that’s the curse of the internet and that special breed, the MMO gamer… if you say it, it’s never, ever forgotten. I have to say though; I agree with Mythic’s comments in that grab bag and would love to hear exactly why it was a problem then and not now. I say that without sarcasm. No, seriously, something changed their mind and would like to know exactly why.

Long term readers will know that this is not something I would say lightly, as I’m not one to go all emo-rage-quit, but there are 2 things that would make me seriously consider quitting WAR:
1 – WAR going free to play (thankfully ruled out)
2 – The PvP combat system becoming too much like World of Warcraft’s trash PvP.

As of 1.3.6 the jury is out on the second one. I’m unfortunately only little bit hopeful it will work out ok, I’ve got much louder alarm bells going off like crazy. Kiting through friendly targets, weakening of the relevance of terrain and a big step towards Zerghammer are genuine threats with this change. If Zerghammer replaces everything, then everyone will suffer and all of Mythic’s recent progress will be for naught. You may think I’m being overly negative, reading too much into it, but in a year and a half of writing this blog I’ve discovered it’s better not to write off my gut feeling on this sort of thing. Everything I’m hearing is pointing to this going in regardless of anybody’s concerns. Unless it’s for a like a temporary 2 week test on live servers, then I will be staying extremely worried for the future of WAR’s gameplay.

A mini Blorc update. Sorry folks, I got sidetracked… I will be continuing and will be posting about his progress, but I just got utterly absorbed by my Witch Elf. I’m approaching realm rank 50 with her, have got pretty well geared for that level and have become reasonably proficient in kicking arse. Of course I still lots and lots to learn to become “good” with the Witch Elf. It’s also dramatically reduced the time I’ve spent on my Chosen, which I need to address. The Black Orc I figure I’ll pick up again in couple of weeks.

Gamescom, Gamesday Baltimore and the big announcements for the future are fast approaching. Many of us are expecting this to be news on a paid expansion, whereas others are more than a little less optimistic (shock horror). There are all sorts of rumours flying around, but they’re hard to substantiate. For example I’ve heard from a respectable contact with extremely good links into Gamesworkshop that not only is an expansion coming, but it’s been practically ready for a while, but between the GOA split and the big scary Cataclysm approaching, Mythic’s release schedule was buggered. Any truth in it? I’ve no idea! I can’t get any confirmations and it could just have been someone involved pulling our chain. In a couple of weeks hopefully we’ll know the truth.

As an aside to that, something is going on general with Mythic and their games. Mythic have stated that Ultima Online has a big announcement coming. The lead for Dark Age of Camelot is also going to Gamescom and I believe Gamesday too. Hmmm. Speculation can lead you all over the place with this.

Next thought… Having had plenty of time to settle into our new Mythic version of the Karak Norn server I can confidently give a bit of feedback on it. The performance in ORvR is vastly improved. Is this to do with avoiding France Telecom? Having played MMOs for a long time, I wouldn’t be bloody surprised. I’m extremely pleased with the improvements in ORvR and it has been great fun. Alas, its not all good news. The lag spikes everyone gets in Tomb of the Vulture Lord (or any dungeon) when something happens elsewhere in the game world have not gone away with the GOA servers, so its obviously WAR itself at fault. I loathe wiping on a boss purely because everyone’s game froze up for a second or two. Actually I don’t know if this is related or not, but if you want to see some kind of server delay in visual form, just use a knockdown on the cousins on the 7th boss in Vulture Lord and notice how they fall to the floor several paces BEHIND where you and the mob are when you actually hit them. It happens almost every single time.

Finally in not WAR related, yet sort of is, news, I’ve been playing an awful lot of “Mount & Blade: Warband” and am bloody loving it. Once you get past the dodgy presentation, the lack of decent instructions and after you apply the Polished Landscapes add on to update the graphics, it is truly a brilliant game. The single player campaign is far deeper than it at first appeared and the multiplayer is absolutely fantastic. I’ve been in siege battles with 222 people, no lag at all and FULL collision detection. I’m sure for technical reasons that you can’t really compare a hosted battle game and a MMO on performance, but a big part of why this game is so amazingly brilliant is that full collision detection. Last word on that my friends, you don’t know what you had until its gone. 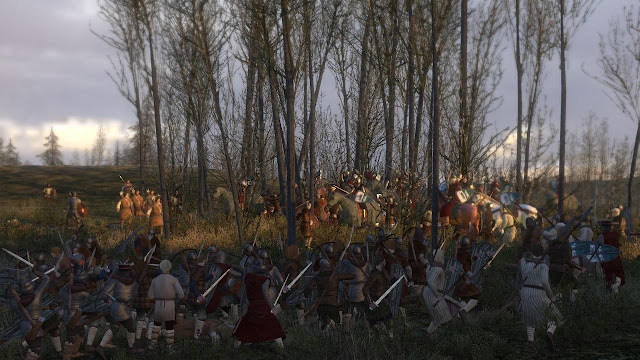 The Kill Frenzy WAR video auteur is making a video of some of the fights we’ve had, I’ll post it ASAP so you can see why I’m gushing about this game.

Anyways that’s me done, I’ll try and keep posting over the next week, but don’t rely on me for news or anything ;)
Posted by Bootae at 15:32