Lost Vale; the good, the bad and the ugly

Had my first trip to the Lost Vale dungeon last night. I only had time to do the left wing and then have a little look around the middle bit, but here's what I thought so far. 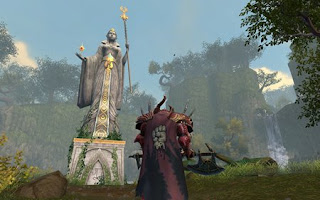 The Good
I really, really like the atmosphere and the look of the place. You get a nice feel for the warping nature of Chaos as it's twisted this once oh so lovely tree huggers paradise. Presentation wise I'd say it is on a par with most of Warcraft's better dungeons, obviously comparing it with the ones also designed for a single group. I'm a big fan of out door dungeons, so this was just my sort of thing. Also the mobs looked spot on, just the way they should and I particularly liked the boss models.

I also love not having to faff around with sheep, banishing and all that long CC (crowd control) stuff that is so important in WoW. I prefer WAR's more in your face PvE in that respect. Good old fashioned scrapping, where subtle use of CC makes a difference. Getting away from over reliance on CC, and the class restrictions plus mods/macros that brings with it is no bad thing.

Bosses are proper tactic style, not just tank and spank. Of the 4 bosses in this part of Lost Vale, 2 were straightforward big hitters with lots of weak spawning mobs to deal with and very easy. The other 2 were more involved, 1 had a very fast moving boss where you had to use these pink cloud things to control who he agros and then the final boss was a big Spider that has a couple of stages and a range of things you need to deal with.


The Bad
When you walk into an instance and the very first mob you fight (a giant worm boss thing you encounter again later in another wing of LV I believe) bugs out, vanishes and then instant kills you all... well that's not a good start. My mate that was showing us round says it does that every few visits. That is totally unacceptable and is playing into the hands of the Mythic bashers. I've never had that happen in WoW, and I'm gob smacked there's a common bug on the very first thing you do in WAR's showcase dungeon. 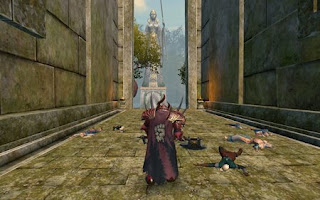 That boss I mentioned where you have to use the pink clouds? Whilst my guide explained how the proper tactics, he then went on to say nobody actually does the proper tactics, since you can just stand on a fallen tree, the boss can't reach you, bugs out and you can just DPS down in total safety. Whilst I appreciate the easy loot and yes we could have done it properly, I would have preferred it if there wasnt such an easy way to bug and beat the boss. It devalues the challenge and epic feel of the dungeon.

Watch out for gettng stuck in scenery... there's some awkward rocks in the final boss room. Which if you get stuck in and the boss agros you, it can end up with a bugged boss and a wipe as the only way to clear it.

Run backs. Mythic have missed a trick here... Whilst they thought of how you remove the resurrection debuff, by having a healer dude that appears at various points throughout the dungeon, why can't you also respawn there? When you die you still respawn right at the beginning. Please change that, I really, really loathe running through empty instances if I accidently click release or we wipe.


The Ugly
Generally the place looks great so far, but some of the textures need a little love, beaches and some of the rocks in particular. Also having seen a video recently where someone applied a bloom type effect to Lost Vale, please please Mythic give us some more graphic options. Obviously I'd like general performance improved for everyone first, but places like Lost Vale could look so much better with a bit of blooming HDR goodness.


Overall, I liked it. I'm looking forward to going back, but I really hope there's less major bugs in the rest of it. I've been on enough MMO launches to cut the game some slack where maybe others wouldn't, but bad first impressions can still turn me off. Please no more bugged first pulls.
Posted by Bootae at 15:09