Instanced scenarios are bloody rubbish. I think they’re one of the factors ruining WAR’s RvR, in fact to take that further I’d say they should just be removed from the game. In their current form at least…

Open RvR in the lower tiers can be sparse, not because people don’t want to do RvR, it’s just easier to queue for a scenario instead of finding a fight and the XP/renown rewards are more reliable than in open RvR. People will nearly always take the easy option after all. Of course if those people already in scenarios weren’t in there, then they’d be doing their RvR out in the open world… You know the whole open RvR bit that WAR is meant to be about... Instead we have Tor Anroc over and over, and over, and over again. There’s a big molten bore reason why despite me having a lot of alts, not one of them has made it through Tier 3 yet.

In tier 4 scenarios are an epic pain in the arse. As well as the above issues, they also count towards zone locks, which means people get all stressed if anyone below level 40 and/or with crap gear dares join them. I’m sure we’ve all seen the region chat stuff with people trash talking those damn noob lowbie scumbags that had the temerity to join a T4 scenario. That’s a real problem, people getting shit just for playing the game the way it was designed to be. Those people leveling up are the future of WAR, it's not exactly promoting the game if we give them grief for getting XP. And regardless of who the community decides is allowed to do what, it’s still just more people taken out of open RvR and dumped into instances.

Of course if there was no scenarios, then the lack of variety in open RvR would become more obvious and it would also slow down the levelling process. So clearly they can’t just be removed, without enhancing the whole open RvR experience. So what to do?

I’ve an idea for a solution, based around the public quest concept. Lets get the scenarios out of the instances and turn them into public quests, and voila! Public Scenarios! Public quests without any PvE element, just the same requirements as the current instanced scenarios have. To a point WAR already has this sort of thing with Fort captures, BOs, etc, working in a similar method, but currently it's just so limited and I would suggest, an opportunity to improve.

Lets take for example Stonetroll Crossing. Grab a section of Troll Country’s barely used PvE zone, remove the mobs and update the landscape with a Stonetroll Crossing style area, complete with troll pacifier and angry rock throwing trolls. Replace the scenario timer with a revolving PQ timer and we’re good to go.
We’d need to avoid making these another way to RvE, but perhaps that could be done by having the XP/renown reward using a multiplier related to the number of enemy players killed in the area during the Public Scenario’s timer. So if you did it solo while Order are in the other zone, nil points for you sunshine, but get stuck in and scrap each other? XP and renown for all yay! Or something like that anyway. :P

How then to stop the enemy refusing to fight in that scenario? Hmm needs some incentives…
What if a Public Scenario was then linked somehow to a Battle Objective, or even a keep? Say if you win the above scenario, then the aforementioned angry trolls attack Stonetroll keep, attacking players and NPCs alike.
How about if each zone had a battle objective that actually was a Public Scenario? If I recall correctly we have 36 identical battle objectives in Tier 4. Seriously, that needs livening up. So rather than yet another kill 6 NPCs, click flag and wait snorefest, how about Artisan’s Gift was say a Serpent’s Passage style Public Scenario? What if Defensive Boon had a capture the flag type system for controlling it?
There's a wealth of options here, it doesn't have to be the 36 identical battle objectives it is now.

But, but, but there won’t be an even number of players! It won’t be fair!
Personally, I couldn’t care less. It’s Warhammer, not HappyClappyHammer. Why in the world would bloody Orcs turn up to Nordenwatch and say “Youz lot stay ‘ere, we iz only takin uz 12 ta fights dem fair like!”. 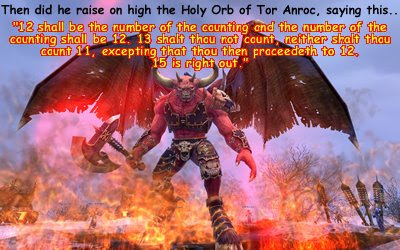 Just because instanced scenarios were in World of Warcraft, doesn’t mean we need them in WAR. If you look back at when WoW’s PvP wasn’t rubbish, it was back when there weren’t any scenarios, back when people used to turn up at Tarren Mill and just kick the crap out of each other. It wasn’t always even, it was very rarely fair, but it was a lot of fun. Far better than the “lets lose this quick” crap you have in WoW today. Ultima Online and Dark Age of Camelot had some of the best PvP ever in MMOs, with no scenarios needed.

This is far from a new idea either. World of Warcraft does actually have Public Scenarios (Eastern Plaguelands, Silithius, for example), just no bugger does them because WoW’s open PvP is pointless and everyone lives in… yup, instanced scenarios. Where as WAR’s open PvP is far from pointless, it’s just suffering from a lack of variety.

Thing is, that variety is there; it’s just needs moving out of those bloody instances.