Syp over at Waaagh! is asking bloggers what their seven favourite things in WAR are from a selection of different things.. Hmmm... lots of hmmm...

Favorite Zone = Praag
This is probably my favourite PvP zone from anything ever. It's got a great atmosphere and with the maze of winding streets, it makes for some awesome sneaky RvR battles. It's a zone that really encourages some tactical play. With Zone Domination my hopes for Praag are even higher :)


Favorite Race = Orcs and Goblins
Whilst I play a Chosen, I'm not quite so convinced by the other Chaos classes, they're cool and all, but not quite grabbing me. Where as I really like the greenskins, I was seriously torn between Chosen and Black Orc at launch... Mythic have got the whole warhammer feel of them sooo right. I've got lots of greenskin alts and as soon as the Choppa is out, I'll have another ;)

Favorite Career = Chosen
Obviously. ;) They look awesome, which for a sad git like me is a big deal :D We've got a nice range of abilities and are great at being annoying gits in PvP. And I never get bored of Quake and Touch of Palsy. 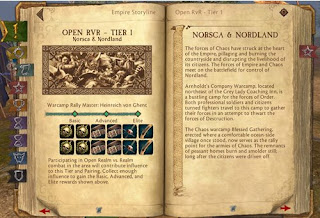 Bloody brilliant. The Tome of Knowledge is one of the best features I've seen in any recent MMO. Really, really cool. I'm terrible for not paying much attention to quest text, then wondering what was going on in the chapter before. The tome's been great, because when that happens I can just read through the storyline and catch up. Then ofc there's all the stats, unlocks, armoury, rewards, etc. Awesome. And it has to be said, WoW's attempt at copying it is just sodding laughable.

Favorite Skill = Touch of Palsy
It was a tough one with Quake (65ft cone AoE knockdown) as close competition, but Touch of Palsy wins the day. Chuck it on someone and then watching them run themselves to death, just never gets old..

Favorite Live Event = Murder Night
This worked well I thought. Didn't need to put too much effort into it, but enough to enjoy it. It certainly turned PvP on its head for a few days with everyone waaaagghing at marked people.
Posted by Bootae at 11:11