I didn’t play that much WAR last week, only dabbling with my Squig Herder (more on that later) and Choppa a little, not because of any issues with WAR, more because I’ve not had that much gaming time and I’ve been more than a little distracted by APB Reloaded. I said recently that I wasn’t sure about its longevity, well I’ve been playing it regularly for 3 weeks now and for a free download, that’s pretty damn good in my book. 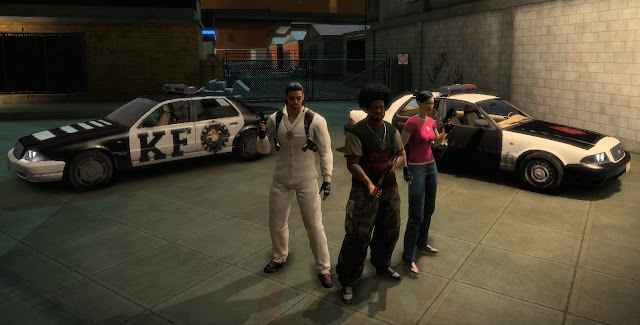 I played APB when it first came out and I had a LOT of issues with it. Player level type stuff had a major influence on if your gunfire would hit or not, the cars didn’t handle very well, the missions felt sterile, the city wasn’t as atmospheric as GTA and the game quickly descended into a tedious and frustrating gear grind. Then of course the company making it went bust and those of us that had spent money on the game were left with nought. All told, not the greatest MMO experience.

The game has now been relaunched using a F2P (free to play) model, with the slightly tweaked title of APB Reloaded. At first I had no intention of trying it out again, even as F2P, but then I heard from a couple of people that things were improved. So I figured I’d give it a try and yup, it is indeed a much better game than before. There are 3 key changes:

Firstly, your aim is now the primary factor in determining if you hit a target. The damage your gun does varies depending on what you pick, but it’s not so much about having higher level guns, instead it is the type of weapon you choose that matters. A sniper rifle does huge damage and can one shot people, while a semi-automatic rifle does less damage but is more mobile, shotguns are lethal up close but have no range, etc, etc. It must be said that the starter gun isn’t brilliant (jack of all trades, master of none), but it takes no time at all to max standing (like influence or reputation in other games) with the tier 1 contacts which gives you access to a wide range of other guns.

Secondly, the cars handle a lot better and feel much more distinct. The starter car, which looks a bit like an Audi TT, is fast, agile and a joy to drive. This is a vast improvement on the original game as you’re instantly going to be having a good laugh while driving, which is kind of pivotal considering what this game is… The other cars you can upgrade to have a diverse range of qualities, from cliché American muscle cars with huge engines that can’t turn corners, to fragile sporty little things or jeeps and vans. There are lots of options to suit what you want from your car and with the game’s excellent customisation tools you can make something unique to you. As KF is playing Enforcers most of us have picked up the Broadwing as our first car after the starter which you can turn into a classic American style police car.

And thirdly, this game was bloody well born to be F2P. By going F2P it has taken a lot of pressure out of our expectations for the game and increased the chances of there being friends interested in playing it. There’s not that subconscious nag of needing to progress and make the most out of our paid for game time, it has become more casual play friendly and something that my friends and I are, as the internet would say, playing for the lols. APB Reloaded doesn’t have the same depth of progression, storyline or sense of place as other MMOs do, it also doesn’t ooze quality in the way of say RIFT or WoW does, it is however an awful lot of fun to play. If it were subscription based game then I would want those other factors as well as the fun, I would want a product that ticks all the boxes if I’m paying for it, but for F2P I’m not so picky. By being free it automatically lowers my expectations, so if it is also fun, then that’s all I care about and anything else is a bonus. 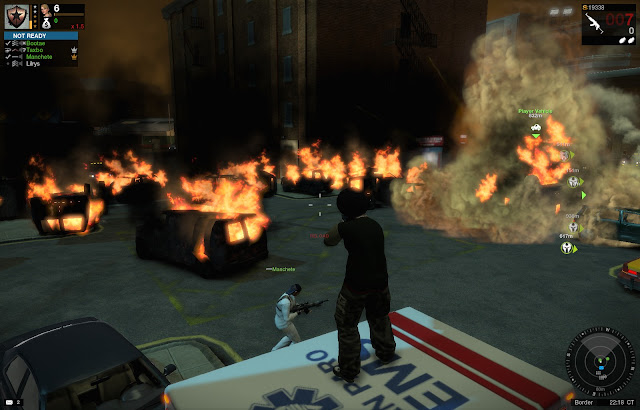 Get a group of you together and APB Reloaded will deliver some serious comedy value and pack your ventrilo with lols. I highly recommend it and am quite comfortable in saying that when it comes to group play it is easily the most entertaining F2P game currently available.

One heads up however… APB Reloaded has the horn for your RAM. It looks at your RAM and in its best Ron Burgandy voice says “I want to be on you”. If you have under 4gb of physical RAM installed then I wouldn’t even consider trying to play the game. If you do have enough but are on a 32bit windows operating system then your game will still crash a LOT because Windows 32 only recognises around 3.5gb of your RAM, but reserves too much of it for itself and doesn’t leave enough for APB, which eats up to 2.5gb of RAM. You can however remedy this by changing how much Windows designates to other programs. There’s a post on the APB forums that tells you what to do to sort that out, it’s the bit about the 3gb switch that you want to look at.
linky link
I give no guarantees on this not having other implications and I’m not techy enough to know if it will or not, but I’m on Vista 32 and I’ve got it working fine. Though I did find that setting it to 3072 did impact on Window’s performance, so I changed it to using 2560 and its been absolutely fine since. Still, you do this entirely at your own risk and I accept no blame :P The best solution is to upgrade to a 64bit operation system, I’m just skint and can’t afford to.
Posted by Bootae at 11:44