When deciding if I will stick with an MMO beyond its first few levels, one of the key elements is the atmosphere and theme of the game’s zones. RIFT has predominantly delivered the goods in this regard, certainly enough for me to be quite content and fast approaching level 40. While working my way through the land of Telara there’s been a whole load of OMG moments and some seriously spectacular views to take in. Great art design combined with some excellent environmental sound effects, proper changing weather and a day/night cycle, has been a refreshing change compared with many of the other MMOs I’ve dabbled with recently. However, whilst in the main it’s been great, it’s not all been perfect and some areas I’ve found a bit more meh than I would have liked.

I’m so bored of generic desert zones that every sodding fantasy MMO deems essential. They’re almost always decidedly dull and uninspiring. Actually I have to say for all its flaws, from an atmosphere and “being interesting to look at” viewpoint, WAR’s Land of the Dead pisses all over pretty much every desert zone in anything else. So far I’ve found RIFT’s desert zones to be sitting very much in the meh department, they’re not bad or anything and I’ve got friends that really like them, but personally I’m bored of deserts. So for me the Scarlet Gorge, Droughtlands and Shimmersand zones were rather uninspiring. Sand is so last year. 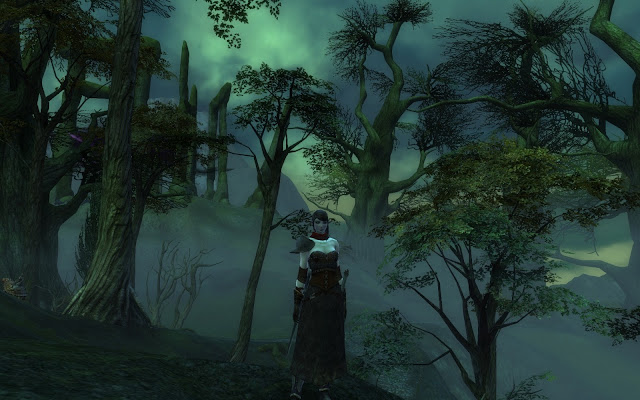 Again from a purely atmospheric viewpoint; Gloamwood, Scarwood, Stonefield and in particular Iron Pine Peak have all been much more enjoyable places to explore. Gloamwood is the creepy forest style zone, which has of course been done before, but it’s very nicely done indeed and has absolutely nailed the theme. It also flows very well into the next area Scarwood Reach (next if you ignore the canyon zone between them..). Gloamwood is dominated by these truly giant trees and Scarwood also has them, but for reasons you can discover, the landscape is being destroyed as the giant trees are being cut down and having their monumentally huge roots exposed and unearthed. It’s a very interesting concept for a zone in that respect, exploring the roots of trees.
Stonefield, a defiant zone, is one of my favourites. It’s rather like the Scottish highlands, but with the bones of colossal giants and beasties all over the place. It’s a wonderful zone in the rain too, with thunder and all that… love it. And then there’s Iron Pine Peak. A HUGE zone with a winter theme and winter is something that Trion have got in the bag; their snow and cold weather effects are very nice indeed. 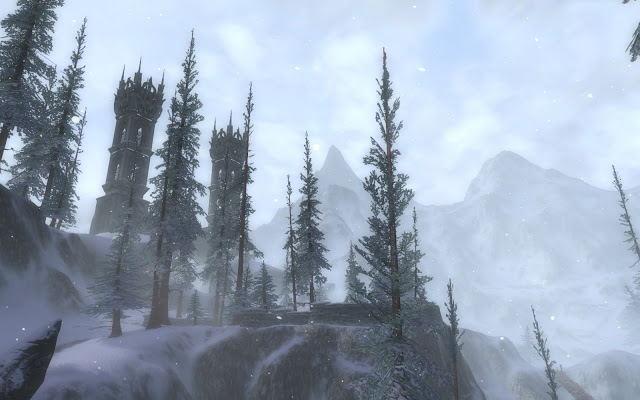 Of course visuals and sounds are only one way of considering whether a zone is any good or not. My comments above about those zones are purely based on that and as such should not be taken as a rating on the overall experience. Scarwood for example, is not a particularly enjoyable zone to quest in; something I can’t quite put my finger on is a bit off. I think it’s to do with the layout and flow of the quests. Yet Doughtlands, which I thought looked immensely zzzzzzzzzzzzzzzz, as a levelling experience worked extremely well.

This has all added up to a generally pleasant and enjoyable levelling experience in RIFT, in fact in many places it’s been extremely good indeed and one of the best in a very long time. Whilst there have been a few zones I’ve not rated the atmosphere so highly in, they’ve worked very well and not been a hardship to play in. With two exceptions anyway… Scarlet Gorge is a pain in the arse and I was happy to get out of it. Too much up and down travel with a bazillion mobs everywhere and a huge area with a DoT gas cloud that is just pointless and annoying. Moonshade Highlands is the other zone that got up my nose, it starts well, but then ends up with a giant clusterfuck of quests and mobs all lumped in one relatively small part of the map. Since both factions are doing the same quests there, it concentrates the players too much into one area and it’s just a bit of a mess. It’s also visually half great and half… like whateveeeeeeeeeer. They ran out of ideas for it I think.

But you know what, that’s actually pretty damn good going. Out of the 9 zones I’ve spent a decent amount of time in, it’s only 2 that I really don’t like. All the others (for varying reasons) have been good. Just a shame about all the poxy sand.
Posted by Bootae at 20:09