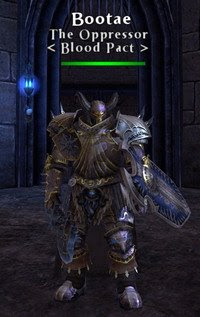 I really like the Chosen class in WAR; in fact I’d say it’s my favourite PvP tank class from any MMO I’ve played recently. I like the fact that it’s not a class for personal glory; it’s all about working with your group and being a team player. I can charge straight in to the enemy, chuck on some of my funky debuffing auras, hit people with my 65ft range cone AoE knockdown (the Quake ability from discord mastery, it’s a must have IMO) and start messing with healers and squishy types. I create opportunities for my groups DPS, screw up the enemies healing and generally be a pain in the arse. I might not get the kills, but I can create the winning situation. And crucially, unlike the tedium of WoW’s protection specs, the Chosen remains dangerous enough that the enemy can't really ignore you.
1v1 I have a good chance against most classes, but I’ve got to be on the ball or I’ll pay for it. Also there are some classes that are nigh on impossible assuming an even skilled or better player. Ironbreakers are a real pain… But then all classes have their nemesis. Unless the class I’m fighting is very squishy fights can take a while, but that’s more fun than 1 shot instant kill crap. 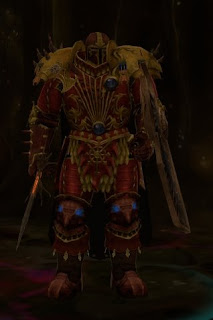 Some of fights can be truly epic. I was scrapping a Rune Priest for literally 10 minutes recently; in the end we both saluted each other and went our separate ways, which was actually a kind of cool moment. Of course I realised after that I’d completely forgotten the whole fight to remove his blessings, doh :P

That said, I’ve been rather disappointed with great weapons. I’ve tried them in RvR a few times (with Dread mastery) and I just can’t get on with it. Mainly because the trade off between increased damage and survivability seems nowhere near worth it. In WAR shield blocking is a big deal, without a shield you take a LOT more damage. I did ok with great weapons fighting 1v1, but as soon as I got into warband+ RvR I got battered, it was like playing a squishy. Perhaps it’s a play style thing, or I need to dramatically change my stat balance to make the most of it. In fact I’m building a set of armour based around strength talismans to test this out a bit. I’m using the oRvR influence rewards as they’re all about DPS. The idea is to mainly use this set and a great weapon when a guild group is short of a DPS for an instance, so I could at least half fill the role. But I can’t see this
working for RvR at all. 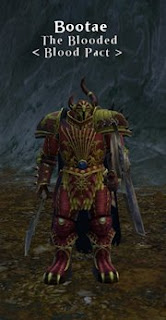 Before the game released I was planning on playing a great weapon wielding Chosen, so I’d be interested to hear other Chosen player’s thoughts on great weapons.

Great weapons are my only real gripe with Chosen, I really hope they get improved somehow, but regardless it hasn’t diminished my enjoyment of the class to any real extent. It’s an awesome class to play, as long as you’re not too obsessed with epeen stato crap. Chosen also happen to look totally kick arse, which (if you’re a sad git like me) is very important.