To really understand why siege warfare in DAoC is seen as being much better than in WAR, just like in my previous post you once again have to take a step back, look at the big picture and consider more than just the details of the combat itself. Not just the how we fight, but the why we fight. So the first thing to think about is what is the actual purpose of keeps? In the most basic sense within both games the purpose is the same; the keeps are there to provide us with something to fight for, they are battle objectives if you like. However beyond that basic reasoning the two games go in very different directions.

In WAR capturing a keep gives points towards the score required to lock the zone it’s in... The only reason to attack a keep is when trying to lock the zone, and in return the only reason to defend a keep is if you want to prevent the enemy getting the points towards the aforementioned zone lock. Unfortunately other than that point score and a bit of extra loot for a guild claiming the keep, ownership provides no benefits of any form. And it must be stressed, once you get the zone lock and the active zone changes, that keep is now completely irrelevant. This is why you very rarely see a guild in WAR take and hold a keep in any serious manner, unlike in DAoC where they will often end up staying there for hours defending their ground. In WAR keeps are just cap it, get the points, lock the zone, move on and repeat back and forth. Am I being too harsh? Not really. Ask yourself, what does holding a keep give you?

In DAoC taking and holding keeps provides an entirely different set of benefits, but to understand why, first I have to explain the difference between WAR’s flight-masters and DAoC’s teleporting. As you know, in WAR when you want to go to a different zone you simply talk to a flight-master in any warcamp, a loading screen appears and then you are in the new zone, instantly. However in DAoC there no flight-masters, instead there are Border Keeps and teleport stones. Each realm’s frontier (which consists of multiple seamlessly linked zones) has a couple of Border keeps. These are massive un-attackable keeps that separate the PvE levelling zones from the full RvR enabled frontier zones, in other words these are the doorways to RvR. Once inside you will find no flight-master for quick travel, instead you will discover a teleport stone, that works like a flight-master, sort of … Same-same but different!

Spread across the frontiers are DAoC’s many attackable keeps, each of which have 4 towers fairly nearby in the surrounding landscape. If your realm controls a keep and all 4 towers, then a teleport stone within that main keep becomes active and under your realms control. You can use these to instantly travel between ANY teleport stones also under your realm control. So if you capture a keep and towers deep in the enemy frontier lands, this means your realm buddies can then teleport yourself from the Border keep (or other controlled keeps) directly into that newly captured keep within the enemy frontier… as long as you also control the 4 related towers.

Think about that for a minute. Control of DAoC’s keeps effectively give you supply lines into enemy territory. It allows you to pin your enemy back and bring your armies in to their lands. Remember this is a campaign without zone locks, where anywhere can come under attack at any point, as such this is a campaign where your ability to manoeuvre is an extremely significant factor. These keeps provide a way of controlling territory. They let you turn segments of the enemy frontier into your own territory, restrict enemy movement and provide beachheads to launch your attacks from. When you look at the frontier map in DAoC you can see effectively lines of battle as control of the land is gained and lost. Like an old school war map! REAL strategic choices. Do you push for the keeps nearest to your frontier and try to directly expand your territory, or do you send raids deep into the enemy frontier and try to capture a strongpoint and make a push directly from the heart of the enemy frontier? What about both? Could you hit 3 enemy keeps at once and potentially control 3 different routes into the enemy frontier?! 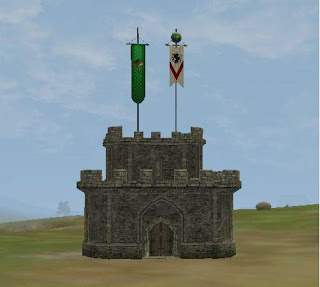 But full control of keeps is a fragile thing. Control means having the keep and all 4 towers (tower image to the right)… You can’t just hole up in the central keep, because the enemy will launch attacks on multiple towers at once and you’ll lose the ability to teleport. You’ll end up trapped in the castle with reinforcements having to reach you on foot or by boat, neither of which is that quick in zones this size. Unless of course that’s the point and you holding this keep is merely a diversion for an attack elsewhere… which is a definite possibility with the open zones and freedom of choosing where to fight.
So comparing the two games, in WAR keeps give you nothing more than points on a scoreboard towards a ping-pong campaign nobody cares about (sorry WAR), but in DAoC the keeps define territory, give major travel options and are actually the defining feature of DAoC’s campaign, instead of a score board.
So what of the keeps and siege warfare itself? At first glance it’s very similar to WAR, with oil, rams, doors and keep lords. The big difference is once again the options you have. Not only do keeps in Camelot have destructible walls, siege weapons can be placed anywhere (no silly siege pads), you’re able to build siege towers and there are other abilities that let attackers climb the walls, which means you’re not limited to just attacking or defending a single doorway. Defenders will be spread around the battlements, as the attacks could come from anywhere. Just spamming AoE on a doorway will not work. All told this is much more like those images of sieges we see in the movies and it makes for much more epic feeling battles. Much more epic, simply because we’re spread out more and we have options in how we play. Visually and in layout terms the keeps are quite different, DAoC’s having a much more traditional, but not necessarily better, theme. DAoC’s feel bigger, but I’m not entirely convinced they are. I think it’s a more a case of placement, which is just like real castles being often on hills and raised areas, which makes them quite imposing as you approach. A key point is that you’re not funnelled to the doorways in the same way as WAR, so you will always see much more of the keep and be fighting over a much larger area, which I think gives it a more dramatic ambiance
I think it’s time to ask: what if any of this could WAR introduce?
OK this is following on from my previous post and the changes I’ve suggested there regarding the overall environment.
Teleport stones = Flight Masters
Having already removed the zone locking system, opened up tier 4 to be fully RvR and added some more objectives to the former pure PvE sections, it’s time to give the keeps and objectives some real meaning. Flight masters should only work if your realm controls a keep and a certain number of associated objectives. Otherwise you have to fly to the nearest zone (with a controlled flight master) and then ride. Alternatively you could choose to leave your city gates or a lower tier entrance and ride there. A racial pairing will now actually have a feeling of going into enemy territory as you travel from one city to the other. While this will mean it can sometimes take longer to get into a fight (though we have scenarios for instant action still), I think the trade off for a proper campaign with a real tangible feeling of pushing into enemy lands is more than worth it.

Upgrade siege warfare
I gather destructible walls are hard to implement now, as are freely deployable siege weapons. OK, so give us siege towers and ladders that work on inner and outer walls. This will mean both attacking and defending melee has more of a role in sieges, the combat is spread around more, it’s a hell of a lot less boring and it brings an end to the DOORhammer Online era.


As before I think these are feasible changes. I’m not asking for 2 years worth of new artwork, or in fact anything that requires structural changes to the game world (I don’t think?). It’s about moving us away from the too prescriptive campaign and not making everything too easy for us. Actually I think that’s a big contributor to Mythic’s errors (and some of the great things too) with WAR, they have really tried to make everything as accessible as possible. They’ve tried so hard to make it easy for us to take part in anything, that they have actually made it a bit too easy.
Posted by Bootae at 15:02