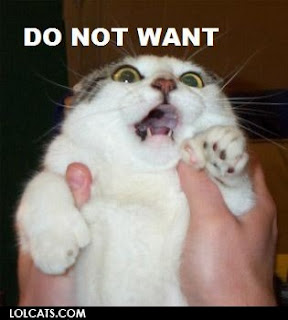 …I still think it’s a very bad idea. It won’t be a surprise to hear this was the big topic of debate on our guild’s ventrilo tonight and it’s probably not a shock either to discover than everyone thought it is a horrible idea. Unless it is to help the introduction of a third faction, in which case it was universally accepted as a worthy cause for such a change. If it there was an expansion coming that adds races to the existing factions, well I don’t really see how this would help, but I'm open to hearing how. Problem is as we don’t have anything concrete to suggest an expansion, we’re left hoping it’s a third faction expansion and praying this was just a poorly timed comment in advance of an announcement.
Putting in a changing faction lock out timer of say 12 hours after logging in with a character will prevent much of the spiteful and tactical cross-realming, but it still leaves us with problems to deal with. Some guilds will be fractured as people decide to jump ship; the grass is greener and all that. And what about a strict no cross realming guild? How do they manage this change? It will also be much easier (with no extra cost) and more common for people to infiltrate enemy guilds and cause all manner of problems. I just can’t see what positive purpose this change has, unless it is related to an expansion. It makes no sense.

In the producer’s letter thread Andy has confirmed they are not considering server merges, so that thankfully is ruled out. I’ve no idea what the US servers are like, but the 2 English speaking EU ones I play on are both very busy, so server merges seemed odd anyway.

Just to throw a little more hope in there; the grab bag video is broken at the time of posting, it only plays for about a minute, but the Bretonnia background is there again. We also have to hope this line from the Producer's Letter means something decent:

"Also keep on the lookout for a special announcement video coming straight from the bloggers to you!"

I think we really need some reassurance from Mythic here. Feel free to email me something positive Mythic (hey if you don't ask you don't get!) :P Everyone I’ve spoken to is very worried about what this means. Everyone is hopeful for an expansion. And everyone will be devastated if that’s not what is coming and we just get Mythic sponsored cross-realming.
Posted by Bootae at 00:54