Nerfage - Apparently this was one of the key moments...

This scoreboard is from a screenshot doing the rounds from the EU city testing that led to a sudden wave of Mythic's nerf bat. Though Mythic claim they had it planned long before, which is of course quite possible, but I would be surprised if this utter spanking didn't make a bit of an impression :P

The names look like a warband from the Norn guild VII, one of Order's best on our server. Not sure who took the screenie, full credit to them, whoever it was. 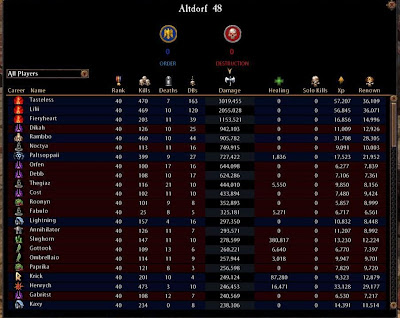 Not much to say, since this tells it's own story really...
Posted by Bootae at 16:57