To continue from my post earlier, I just saw this thread by Wolfner on WHA where he references something spotted by Yitu (German blogger so link is in german). It's talking about the 1.3.4 video grab bag where as always there is a warhammer background type thing behind them. Apparently (I've not checked this) the grab bag background is normally a map of the Empire, or when it was about the Land of the Dead a map of that area. This grab bag is unusual because for no real reason it has Bretonnia in big letters smack bang in the middle of the screen and not a lot else visible... and this is for the whole interview. 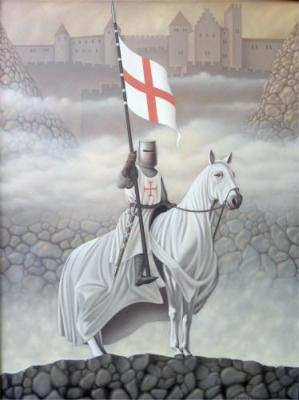 Why is this relevant to the Red Plague? Well that would be because the Red Plague is most famous for being inflicted by the Skaven upon Bretonnia, which involved both the Bretonnians and Wood Elves.
If you're not familiar with the Bretonnians, they're a nation of humans with a mixture of classic Arthurian legend and 14-15th century French chivalric knights theme. It is a very militaristic society, full of double-hard bastards with big weapons and they're all itching for a fight (as well as from the pox).
Politically they are independent from Karl Franz and his Empire, but have often allied with them. Also their entire culture and religion is being manipulated by the Wood Elves. Never trust an Elf...
Another clue? Or just another example of a community desperate for an expansion clutching at straws? Pffft... I have no idea, but either way it's something positive and potentially awesome to talk about so why the hell not! ;)

Oh and I get to put a nice picture of a Knight Templar up with an English flag for Saint George's day and it's actually on topic! AWESOME SAUCE! Well, apart from the fact it's now late at night and it's actually the day after. Bollocks, I should have posted earlier...
Posted by Bootae at 01:40